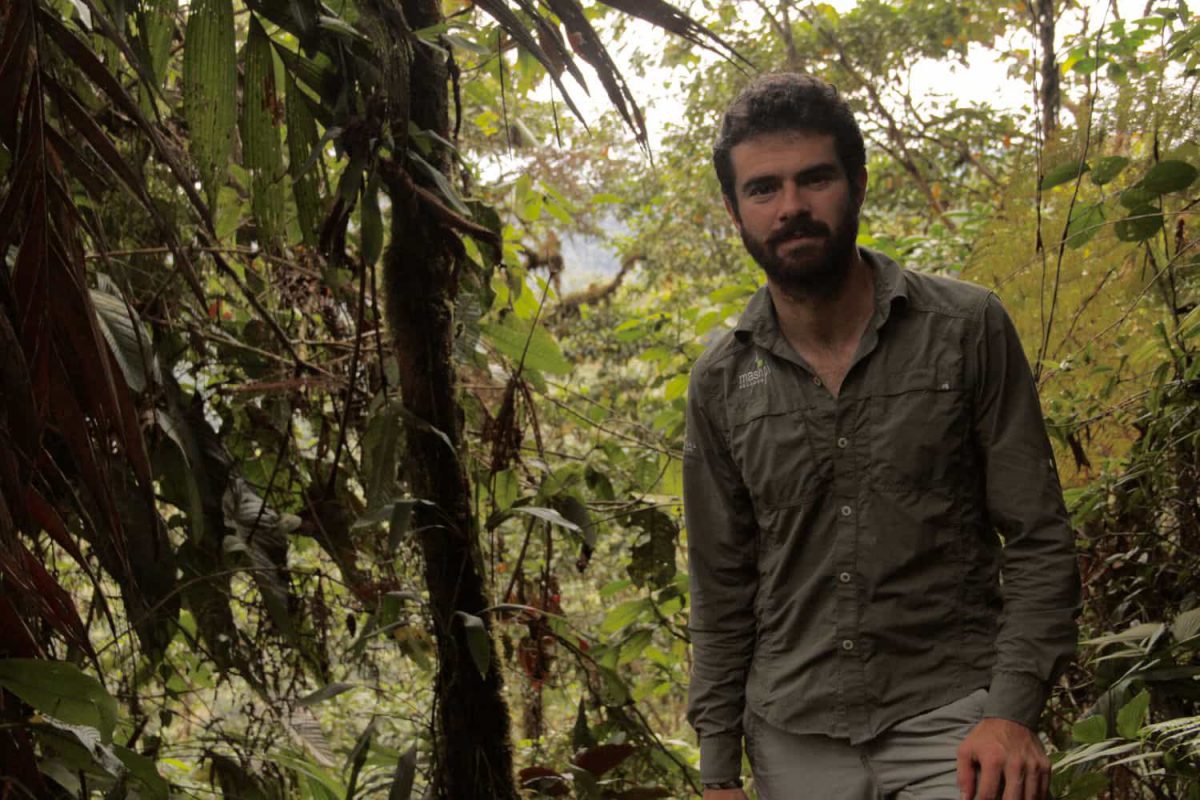 Carlos Morochz doesn’t sleep with his boots on anymore. Mashpi Lodge’s 30-year-old Resident Biologist admits that there was a time, at the beginning of his career at the reserve, when he’d even wear his heavy duty footwear to bed, just in case.

From his affinity with the outdoors you’d think that Carlos was born in the wild and raised by wolves, but in fact he grew up in the Ecuadorian capital Quito with his architect father and house-wife mother, alongside two sisters. His love of nature came from his grandparents.

“They always made spaces for their grandchildren to enjoy nature, and they had horses. In fact, that connection I felt with horses influenced everything,” he says.

After finishing school, Carlos studied biology at San Francisco University in Quito, a new subject there with only a handful of other students.

“I always wanted to do something different to other people. The course gave me a good foundation, a basis in the terminology, but real biology is done in the field. There have been times when I’ve risked my life for biology, with venomous snakes and falling branches,” he says.

Carlos’s studies would soon see him turned out into the wild, searching for the elusive umbrella bird in unchartered terrain for his thesis.

After two months, he tracked it down on a mountain side in the town of 23 de Junio with the help of a local guide.

“I learned how to find treasure!” he says. “And to do it I had to learn how to survive in the forest, in the wet, cold, on no sleep, working strange hours. I learned how to get into mud – the gift of getting dirty! There’s nothing like it.”

Shortly after finishing his degree, Carlos decided he wanted to see that mythical bird again plus other rare creatures, this time at Mashpi, and made a proposition to the founders, including former Mayor of Quito, Roque Sevilla, to begin investigating.

He cut a strange figure when he first arrived at Mashpi: a skinny young city boy bumping along the terrible unpaved track in his beaten up 4X4, armed only with a tent, his trusty pair of boots and a dazzling enthusiasm for all things creeping and crawling.

That day he met Franklin, now a naturalist guide at Mashpi, who at the time had made the transition from armadillo hunter to forest guard, living in a wooden cabin on site. The staff house was just being built, the hotel just a stretch of flattened earth. 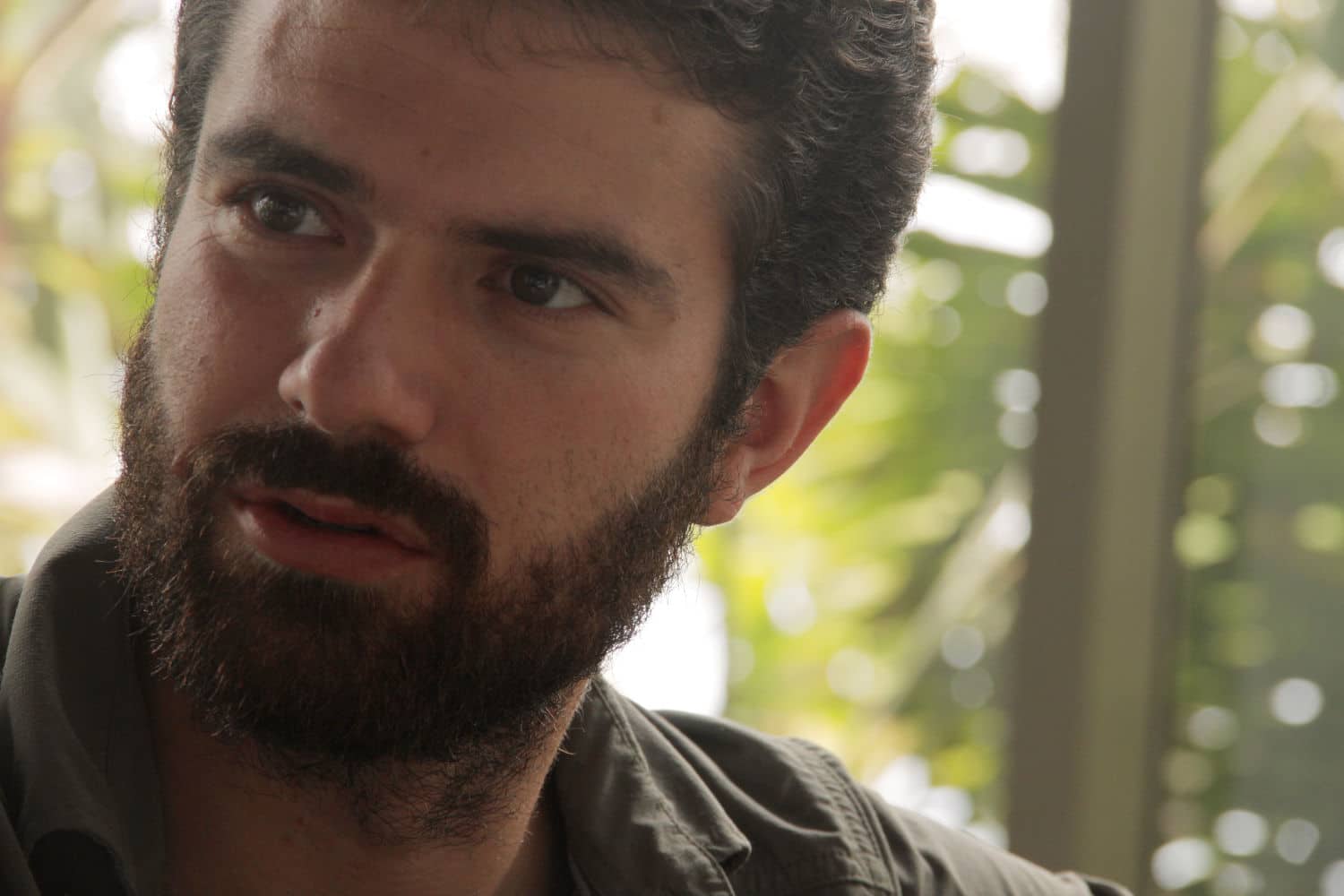 But on that first night, all the other workers, including Franklin, disappeared back to their homes in nearby communities. Carlos was left to sleep in the reserve alone.

“I slept in my car and started out at 4.30 the next morning – imagine sleeping here in the hotel all alone!” he laughs. He headed down the only path that existed at that time, (at the time it was known as Limones – now called Capuchin) and down the track towards where the Life Centre is today.

On that first day he found all the birds he had proposed to find, including the umbrella bird (the very same that had taken him two months to locate for his thesis) and the mysterious cock on the rock, as well a capuchin monkey, something he’d only ever seen seven times in his life before.

“After that I spent four months listening, moving around the reserve looking for lekes, staying alone,” he says.

“I was a little afraid of the unknown.”

When the four-month project was up, Carlos began looking for new work, as the hotel still seemed to be no more than a far-fetched fancy. But after he showed Roque a camera trap, a gift from his grandfather, and the incredible images of tigrillos and other mammals it had captured, a new proposal was made: discovering the wildlife of Mashpi. Mashpi bought five camera traps, and Carlos started a new project, the Butterfly House.

It’s impossible to talk about Carlos’s – and Mashpi’s – conservation highlights without mentioning the Mashpi Frog, a new species discovered by the Resident Biologist, endemic to the reserve.

“Since I was a child I wanted to find something new,” he says. “But this was a collaboration. A lot in biology is hidden, secretive. Science shouldn’t be selfish! We should share information to protect the forest.”

There was also the Mashpi Magnolia, and, Carlos estimates, some 10 to 15 new species will also emerge.

Though his sights are firmly trained on wildlife, Carlos has another clear objective for his time at Mashpi: to change the lives of people.

“I once did a course about birds given by a man who had never studied, never been to school or learned about biology. And I learned so much from him. So from then I decided I wanted to give other people the same opportunities that I’ve had, by sharing the knowledge I have,” he explains.

Carlos set about involving local people in the projects, employing them as guides and in the Butterfly House. He studiously trained them and asked them to spread the knowledge. Now, around 80 percent of Mashpi’s employees come from local communities. 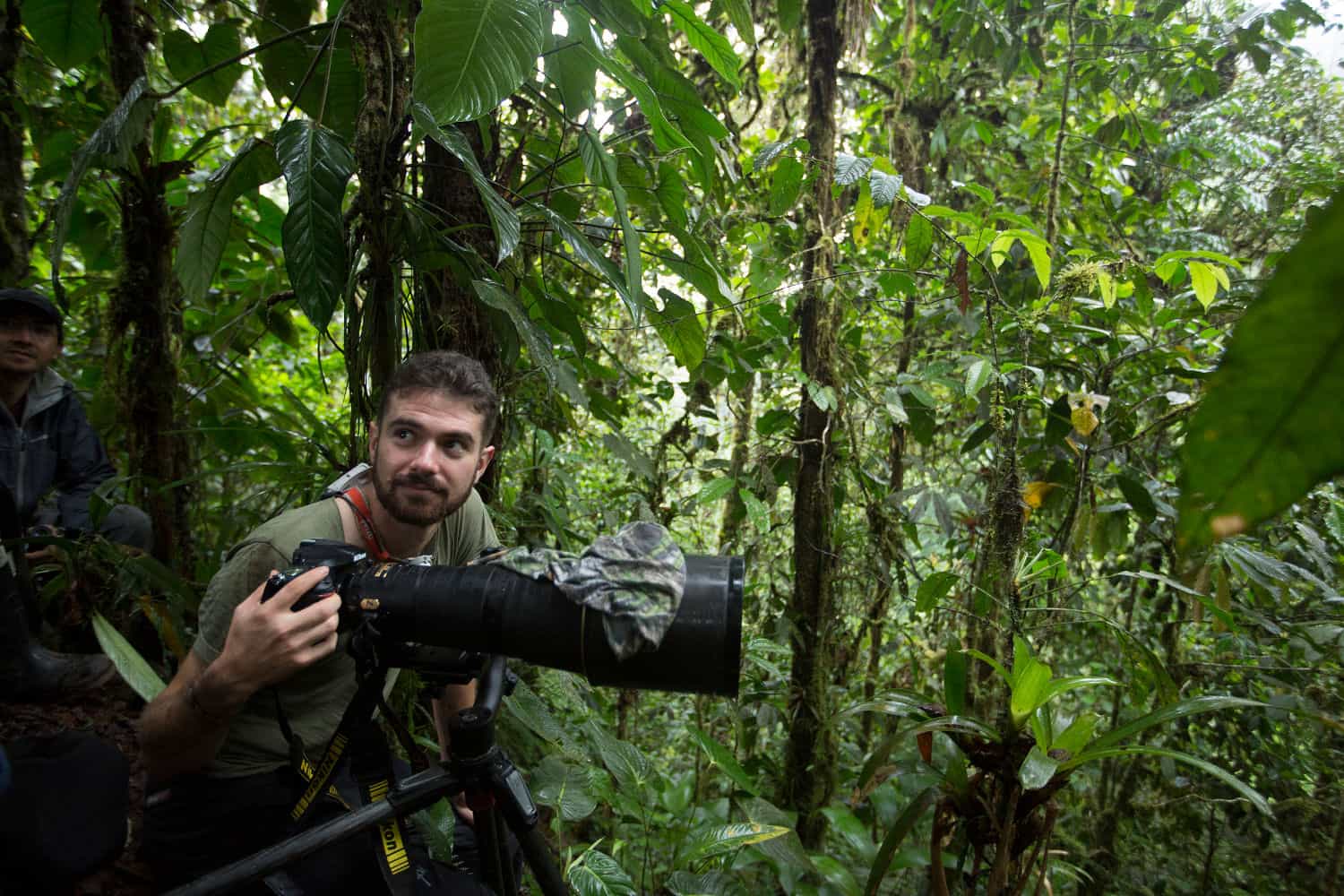 According to Carlos, this is key for the conservation of the cloud forest: the integration of local communities into the project. He believes in raising consciousness among the disparate groups who have made the area their home.

“People here are colonialists, they are not an integrated community. We need to change their ideas about agriculture and introduce a long term sustainability plan. We need to make them feel proud of the cloud forest!” he says.

As for future plans, Carlos is keen to expand the project across the region: “Conservation doesn’t work if we’re an island.”

An immediate goal is for investigation to become part of the guest experience at Mashpi Lodge, and to develop the scientific department.

“This is the most important thing for me. I want interaction between biologists and guests, for guests to feel like they are part of this program,” he adds.

Carlos cannot pick out one favourite place in the reserve, but admits that night walks through rivers are what excite him most.

“I like the fact that you only have one point of view so you focus more. I’ve had more finds in the night time than in the day.”

And as long as he has his trusty boots on, getting wet is the icing on the cake.