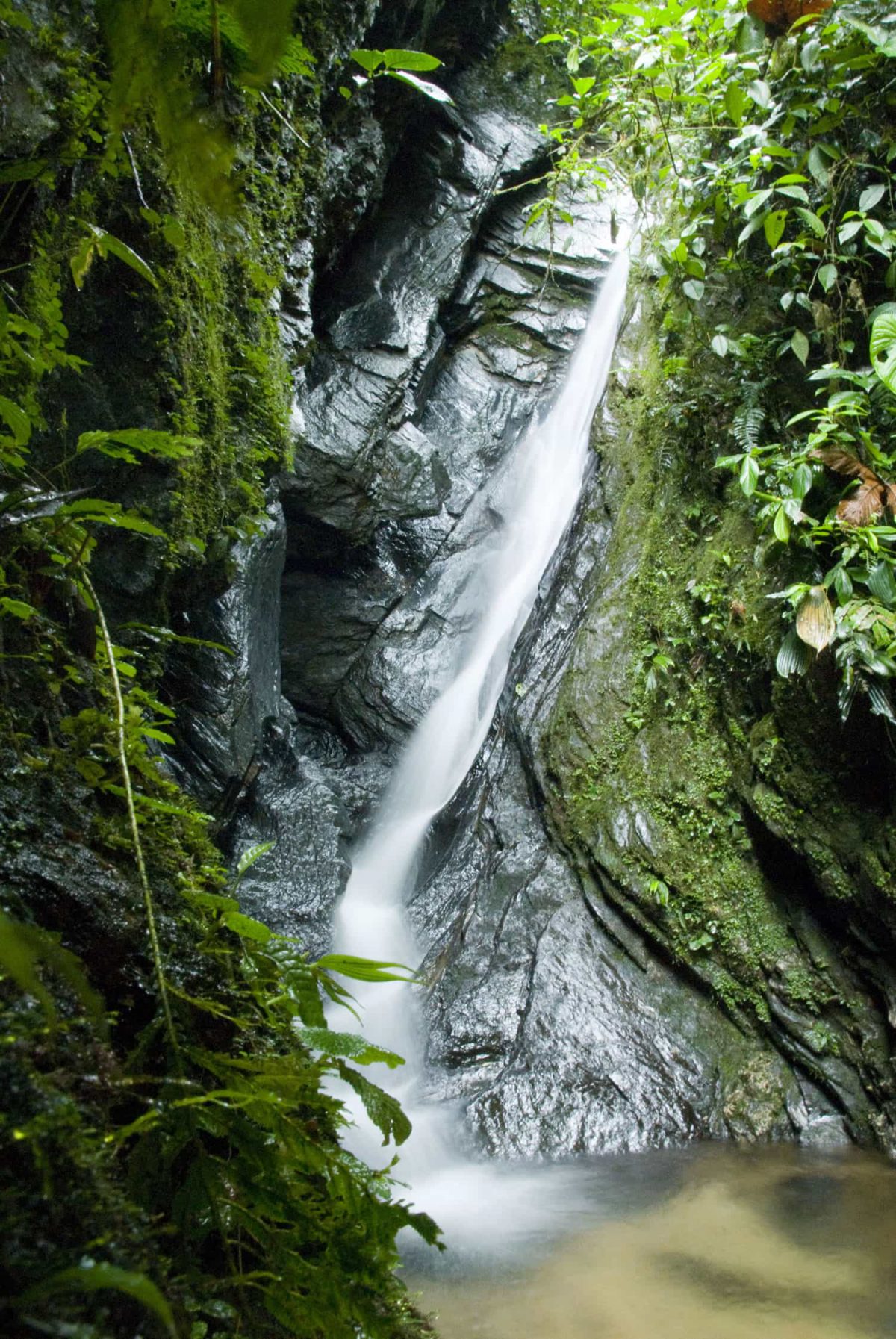 There is more than one type of tropical forest – not all are the Amazon vision of navigable rivers and woods where the bases of its enormous trees are flooded. There are tropical forests in the mountains, where the air comes from the moorland and kisses the hot gusts of the lowlands; forests that extend their inhabited branches and are purified by the dew carried by the clouds. Forests that are not high lands, nor low lands and in the transition mix their inhabitants in a potpourri of biodiversity. The forests of Mashpi are found in this quandary between high and low, an eternal sway between the condensation of the clouds, creating an entirely unique place.

The forests of Mashpi, part of the wonderful bioregion of Chocó, are found between 550 and 1,400 metres above sea-level, on the western flank of the glorious Andes. This location, a balcony above the forest with an Andean roof, is the key to its singularity. At this altitude there is a transition between the “always-green of low lands” forests and “always-green of high lands” forests. Technically, this transition between ecosystems is known as an ecotone and Mashpi has been blessed with species that inhabit both forests, but also with rarities that are not found in one or the other. It is a cradle for endemic species, creatures that are not normally seen on either of the sides. The position of these forests in the first echelons of the mountains transforms them into the birthplace of rivers; into places of combined and perfect climates; and the sum of all these physical characteristics manifest themselves in coloured butterflies, frogs, bromeliads and other unique creatures.

The geography of Mashpi’s zone is quite accidental. Where the Reserve is, in particular, there is gradient of around 800m, but it is not a continuous, homogenous slope, but rather an ascent interrupted by gorges, hillsides, and ravines; small and great hills cut by veins through which the enormous quantity of water runs, that the forests are able to capture. This kind of relief – hills inclined up to 45 degrees on the western flank of the Andes, mountains on mountains – is the entrance to welcome the winds that travel from the Pacific, unded on by the clouds that are born from the warm waters of the sea.

Not all can survive this insurrection of slopes and gradients; the species at 800m are different to those at 1,200m and in the middle is a varied and patchy range. This is perhaps the most significant characteristic of Mashpi, it is a reserve of life, of tropical forests, and of the mountains. 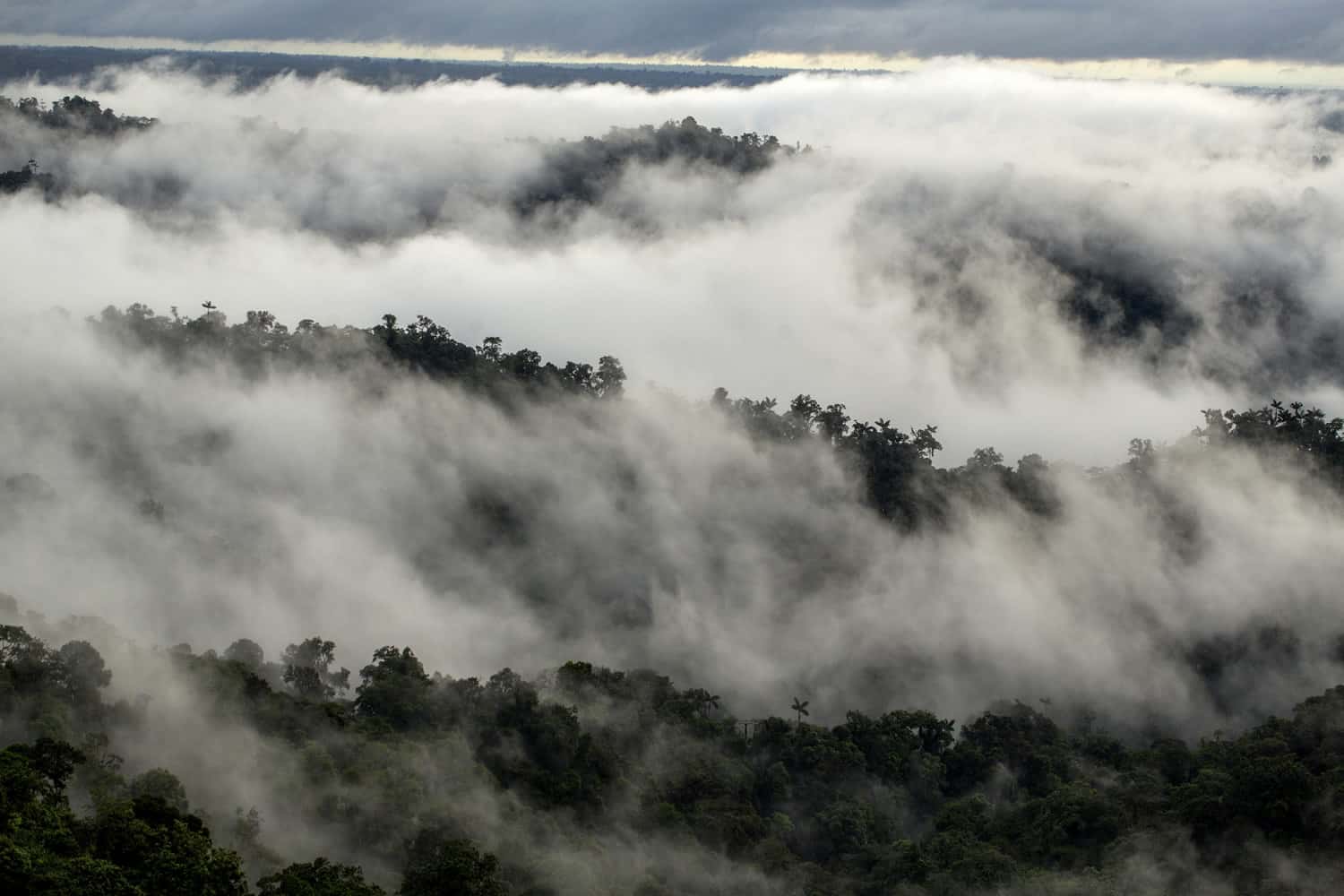 The mountains have a special force, they always have been admired for the imposing landscapes that they paint and venerated as gods. On the western flank of the Andes of Mashpi, the mountains stretch towards the sky, and are glimpsed by the passers-by that circle on the “Libélula”, showing their strength covered with moss.

But there is another force at work in the mountains, trapping in the core of the mountain whoever may make a false move. On these hills, an eternal game is at play, a caress to the ground from the vital liquid of the mountain: the birthplace of the river and rain is here. The inevitable gravity of that force that traps each drop of water that falls and forces it to run in an eternal hurry. In Mashpi rivers are born and the mountain has eyes, eyes for where all the water that the trees, plants and moss has been able to trap appears.

In the high part of the Reserve, in the forests of the high grounds, there is more presence of mosses and epiphytes, sponges to trap water and feed it to the mountain. As the altitude decreases, that same water springs up, a cold source of life, and in this way it begins its journey towards a river, full of stones and surrounded by frogs. Descending further, slightly bigger rivers form, but still estuaries, rapids, with waterfalls and fresh ponds, visited by otters, many insects and macro-invertebrates, and crossed against the current by the “preñadillas” – autochthonous Andean fish.

There are many of these estuaries in Mashpi, so many that there are some that run down the mountain without ever being baptized. Finally, below, in the warm forests of the lowlands, all these veins join together, forming great rivers of rapid waters like the Mashpi River of the Pachijal River. It is great trajectory for the water, each drop that has travelled the length of the mountain. From the moment that it knocked into a bromeliad in the highland, up until it arrived in the Pachijal, it has been a witness to the presence of thousands of species of plants, amphibians, reptiles, birds, insects, fungi, mammals and fish, all so different between themselves. 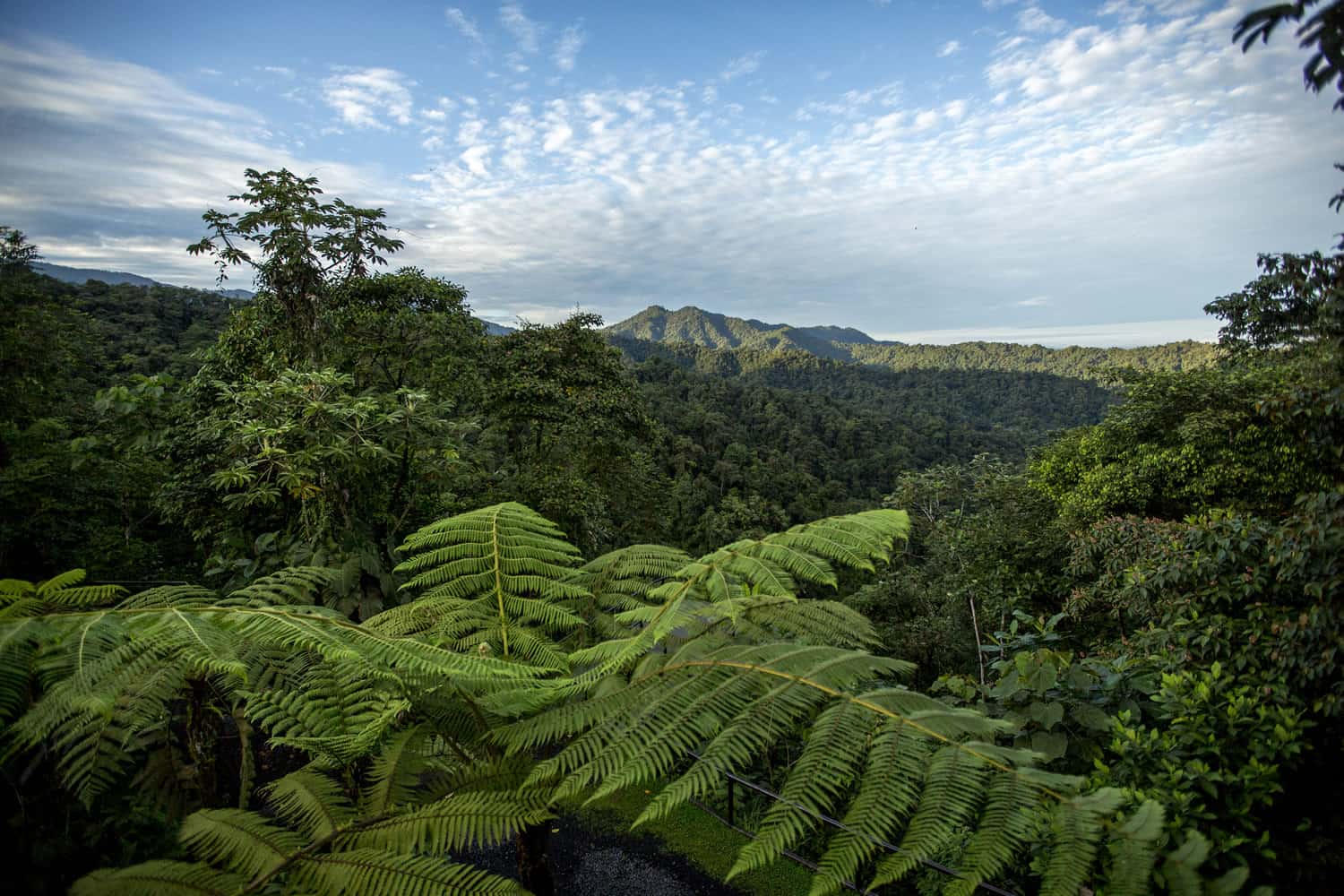 The relief, the gradient, the winds and the clouds, the humidity and the rivers are key for the climate. Likewise, this descent of hills and ravines is fundamental to the creation of microclimates – pockets that possess distinct climates despite being in the same place. The Reserve of Mashpi has this; the climate in the high part is cold and in the low part warm, even hot at some times of the year, and in the stretch between the two a world of varied climates exists that are of great importance for the ecosystems. At the level of the Chocó, the Reserve finds itself in what is known as a “subtropical very humid region.”

This means that the climate is perfect in terms of temperature, with an average of 20 degrees Celsius, hitting 18 when cold and 22 when hot; and a lot of rain with up to 3,000 mm of precipitation annually. Added to this, there are places within the ravines and around the waterfalls where the humidity intensifies; pulverised water and condensation form a humid and warm space, homely for aerial plants like orchids and bromeliads, and all the fauna associated with them like frogs, hummingbirds, bees and many more.

In the high part, the cold attracts a great variety of birds making it the best place to bird-watch and also, during the night, to observe key species of frogs, like the famous crystal frogs. In the low part species of huge trees are seen, with robust trunks that due to their weight would not be held by the mountain, and a variety of little mammals looking for palm seeds, and maybe behind them some kind of cat. Mashpi has a good temperature and good amount of rainfall; the rain is like a blessing of life, and with greater humidity exists greater biodiversity.

The combination of these physical, factors, like the relief and its heterogeneous descent towards the lowlands; the rivers, carriers of the liquid of life; the climate, the temperature and humidity – merged they create a biotic bouquet, an explosion of biodiversity, an Eden of individuality, a nest of endemism. In Mashpi you can find many species that are endemic to the Chocó, and even endemic to that particular pinnacle between the clouds, species ranging from plants to great mammals. The Chocó is a “hot point” of biodiversity, a condensation of diversity with a high incidence of endemism. Although it has been highly populated, it is a place that still has not been studied in depth, partly because of the excessively rapid deterioration across the whole region. What is known to date is that 25% of its plants and around 13% of its animals are endemic.

To date, 35 endemic species of birds have been found in Mashpi, among them the iconic umbrella bird (Cephalopterus penduliger), which can be seen from the terrace of Mashpi Lodge, or in the throes of mating in one of the “leks” found in the Reserve.  Another endemic bird that can be easily seen from the observation tower, the bicycle or the Libélula, is the colourful toucan of the Chocó, (Ramphastos brevis), crowing from the branches, always in a noisey gang. In the higher part of the Reserve, where the hummingbirds visit the sweet water feeders with vehemence, the purple-tailed sylph (Aglaiocercus coelestis) can be seen, with its beautiful long tail of blue and violet. 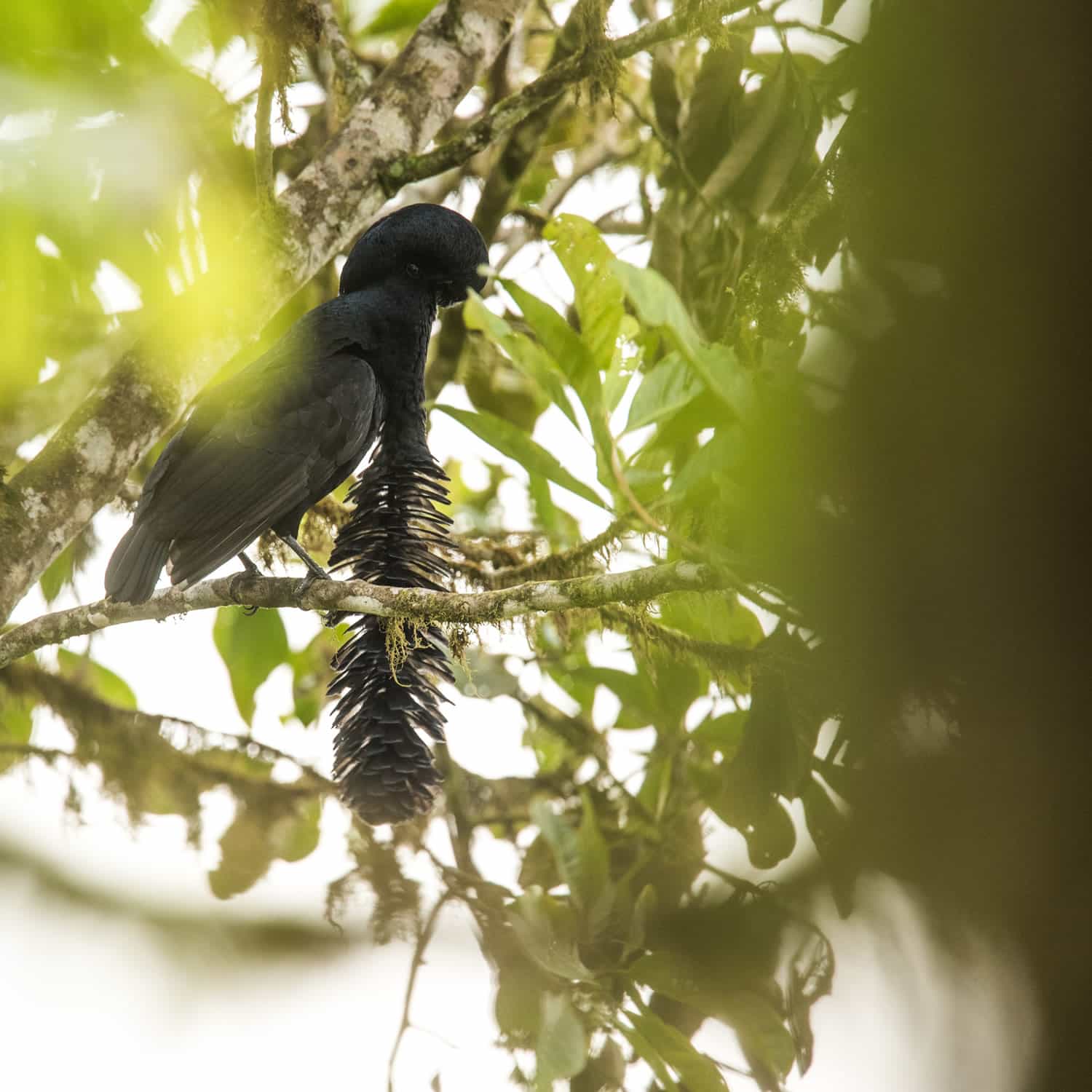 Among the mammals there are also endemic species. They are slightly more difficult to see, but number around seven species, rodents in particular. Historically, the Mashpi zone was the home of the critically threatened coastal spider monkey or brown-headed spider monkey (Ateles fusciceps).

This endemic species is extremely difficult to see, and its registered sightings are very few given the dire state of conservation. However, the Reserve offers the shelter of a perfect, unbroken habitat, with the hope that it recuperates so much that its long tail can be seen hanging around the Lodge. When talking of endemic species, one can’t leave out the amphibians, seeing as they account for more than 60% of the endemic species of the Ecuadorian Chocó.

It is not known exactly how many species there are, as endemic species are discovered with relative frequency, as was the case with the last discovery of the torrent tailed Mashpi frog (Hyloscirtus mashpi), whose name honours the place where it was studied to establish that it was indeed a new species. Mashpi also shelters various endemic species of harlequin frogs, many in serious threat of extinction.

One example is the harlequin of Mindo (Atelopus mindoensis), a diurnal amphibian which is green in colour and eye-catching with its reddish streaks. Endemic species of toad include the blue-spotted toad (Rhaebo caeruleostictus), an example blotched in blue, unique and also threatened. Finally, Mashpi is home to at least eight species of endemic crystal frogs (Centrolenidae), especially eye-catching due to their transparent bodies, leaving visible the beats of their heart as if through a glass pane; and also of some endemic species of tree frogs. 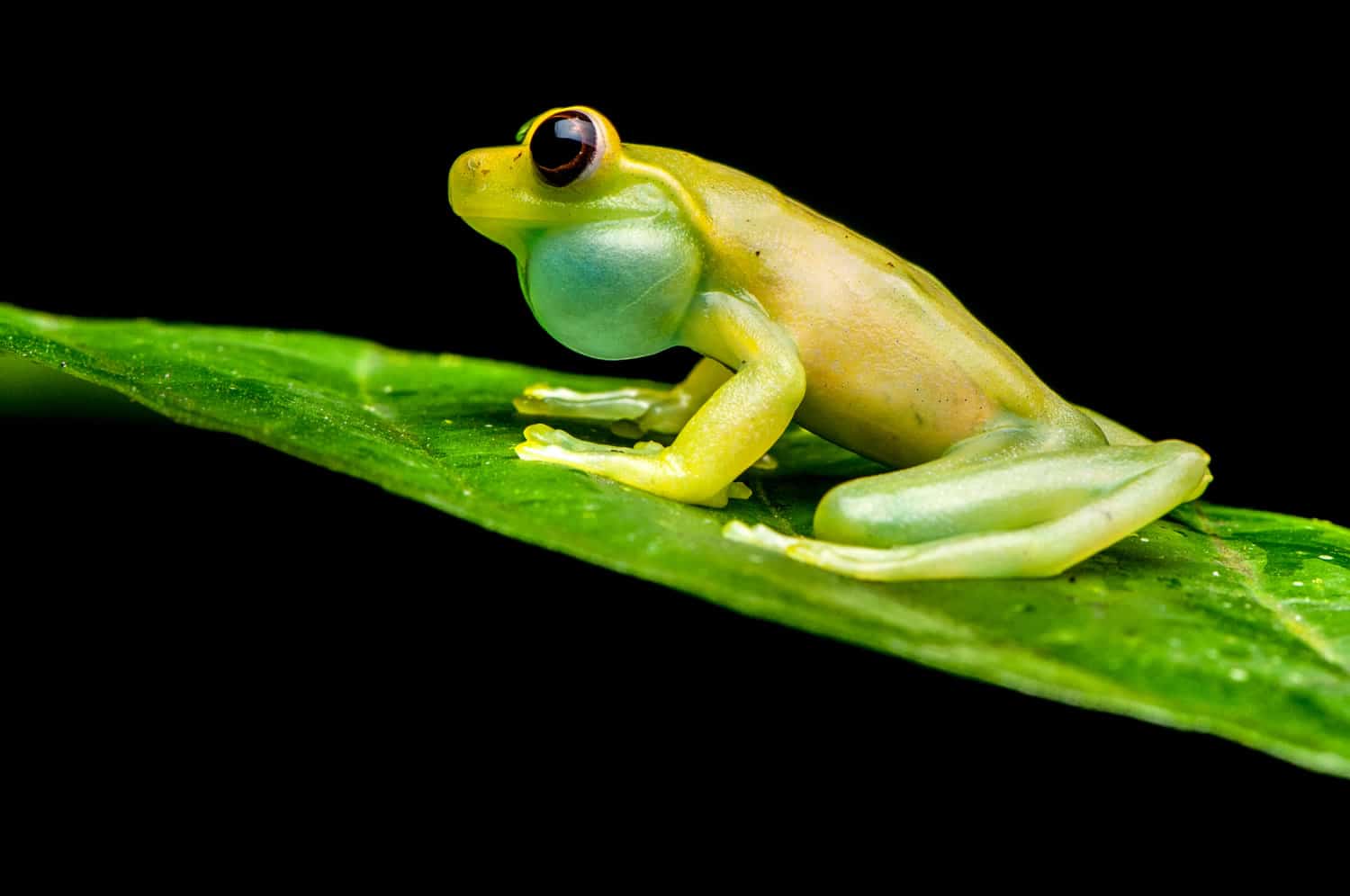 Endemism cannot be discussed with touching botany. Equal to the animal kingdom, the levels of endemism of plants in the region are high, a quarter in total. One example, impossible not to mention, is the Magnolia (Magnolia mashpi), a species discovered in Mashpi from the “Libelula”. This species belongs to a genre autochthonous to the Chocó alone.