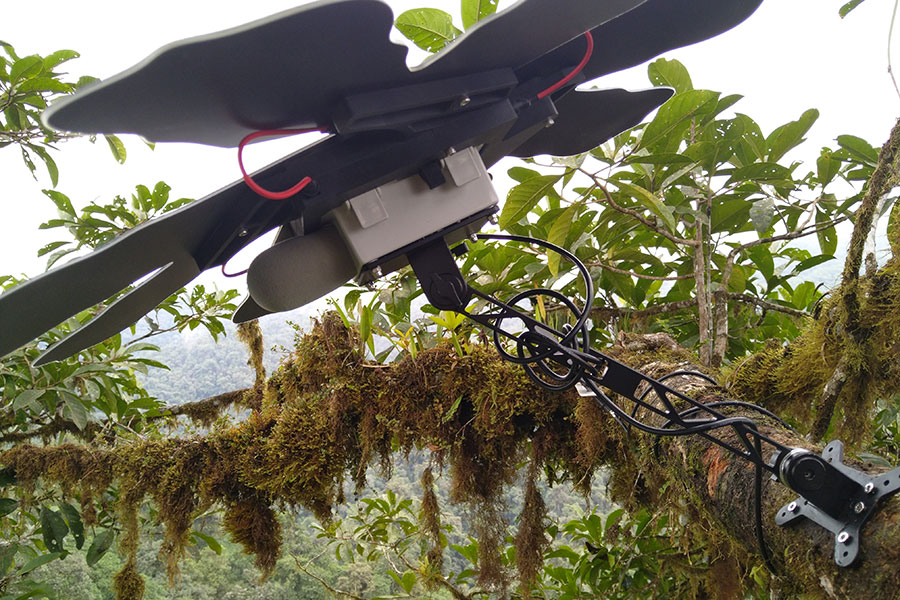 The dictionary definition of a guardian is a person who cares for or guards something, but beyond that strict definition, a guardian could also be a thing or an animal, not just a human: a dog or any other animal that defends or protects. Today, technology also acts, one way or another, as a guardian: we live among surveillance sensors, speed cameras, and voice-activated home digital security technologies. No matter what type of guardian we’re talking about, their mission is to protect something valuable from something potentially dangerous.

The Forest Guardians project, as its name suggests, aims to safeguard the integrity of the protected forest of the Mashpi Reserve — located in the northwest of Quito’s Metropolitan District, within the Chocó Andino Biosphere Reserve — employing technology at the service of conservation.

Using an audio recorder, powered permanently by solar panels and continuously connected to the internet via a cell phone signal, the Forest Guardians in the Mashpi Reserve are located in strategic places. Through an Artificial Intelligence software, they can detect sounds at the precise moment in which they occur. These can be both natural and man-made. Special attention is paid to sounds, such as the whine of a chainsaw or the explosion of a shotgun, which indicate illegal activities. Using pattern matching technology, the software then sends an alarm to the Reserve’s park ranger team, so that they decide quickly to investigate what might be happening at that location.

Download the Rainforest Connection app to listen to the Guardians of the Forest in Mashpi live: 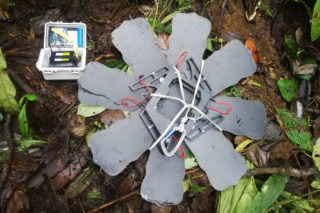 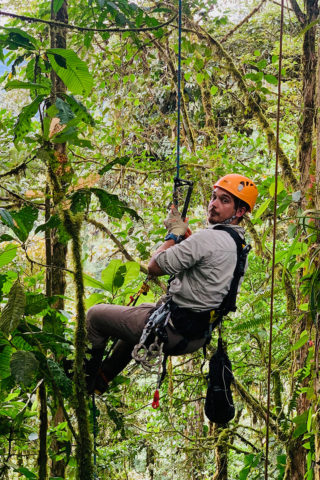 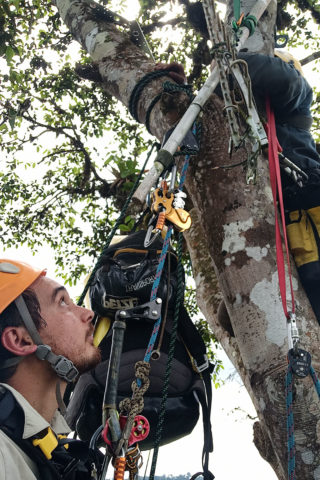 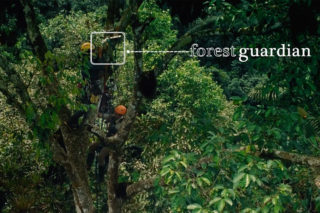 Mashpi Lodge and Fundación Futuro, together with the United States-based Rainforest Connection, have employed this technology in the 2,500-hectare Reserve since 2019. They have averted dozens of threats to its integrity, although, above all, the 10 Forest Guardians have acted as deterrents — would-be loggers or hunters know the Guardians are listening out and so avoid it.

Today, the goal is to take advantage of this same technology to go one step (or several) further. Why not, in addition to monitoring the sounds of illegal activities, identify the sounds of the fauna present in the forest? Why not use them to improve scientific knowledge of forest species? Why not enable guests and explorers to understand further the work of the Forest Guardians and of conservation?

Listen to the sounds of the reserve while reading this article!

The science of forest sounds

It may seem difficult to understand how one records all the sounds of the forest, but let’s break it down. In nature, we can hear the rain, the wind, birdsong, the chirping of insects, the vocalizations of amphibians and mammals, or any other animal that emits acoustic signals. Dozens of sounds occur simultaneously.

On the one hand, we have biological sounds, which are called biophony, such as a howler monkey when it calls out to its troupe, a toucan making its presence known to others, a tree frog chirping hoping to find a mate, or the almost deafening concert of cicadas when sunset falls on the forest. These animal sounds are usually accompanied by those conjured by the rain, the wind, the rustle of leaves, the burbling of a river — these are called geophony. Finally, we have sounds produced by humans, known as anthropophony, such as chainsaws, vehicles, voices, or shotguns.

Together, they all make up soundscapes: the acoustic properties of a particular area. Think of it as a symphonic concert, with different instruments that we cannot always separate and differentiate. In fact, it’s extremely hard for our ears to identify and/or interpret each sound separately. Without the ability to discern sounds as we do with the colors of a visual landscape, we become accustomed to hearing the soundscape as a single melody, without recognizing individual chords. This is where technology is a wonderful tool.

In order to understand this world better, we need to discuss bioacoustics, the scientific discipline that studies the sounds of nature, especially animals, and interprets them in order to identify a location’s biodiversity, to understand behavior, and to evaluate the communication or sound interactions between animals. For several years, bioacoustics have been used to identify species according to the characteristics of the acoustic signals they emit. Today, the use of audio recorders placed in the environment has revolutionized the study of species diversity. They require minimal financial investments, little time in the field, and don’t disturb the local wildlife. Their use is even more revolutionary in locations that are difficult to access and monitor — which is the case of the hilly, dense, rainy, and muddy terrain of the Mashpi Reserve! 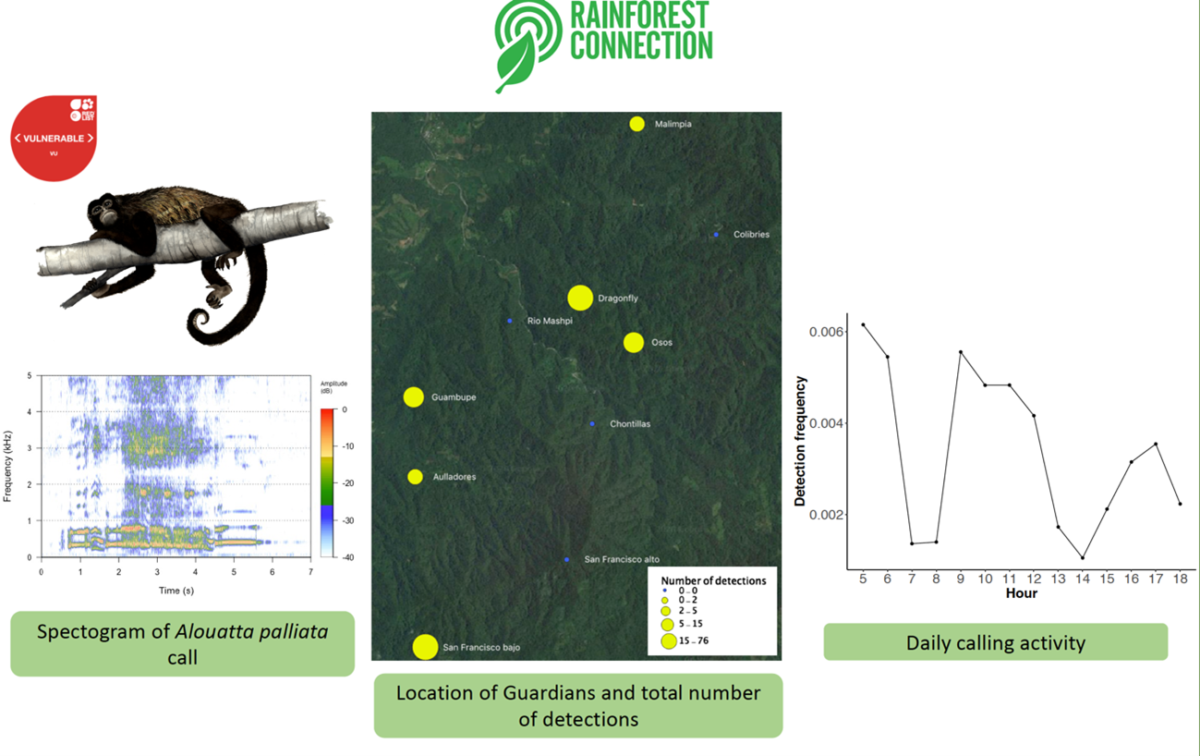 Years of research have generated significant bioacoustics databases, also called acoustic libraries, that contain the details of the vocalizations of different species. The Forest Guardians technology then uses these libraries to monitor continuously, record creatures that are not easily detected with the naked eye and identify what species it is. Thus, in addition to acting as protectors, the Guardians become forest experts. How?

The artificial intelligence behind Guardians of the Forest

The Guardians are automatic sound recorders. Seen from above, they look like a small windmill, with eight fixed blades. These are, in fact, solar panels oriented towards the treetops that capture sunlight and power the waterproof box of tricks beneath. The box has built-in microphones that detect sounds (and ultrasounds) 365 days a year, 24 hours a day. The recordings are stored in an internal memory, while a cell phone signal transmits the information to the Rainforest Connection platform, which in turn monitors the sounds in real-time. The platform was developed to facilitate the handling of huge amounts of acoustic information generated by the recorders (at dozens of locations all around the world). To give you an idea, each “Guardian” transmits more than 50,000 sound files to the platform in a single year.

Download the Rainforest Connection app to listen to the Guardians of the Forest in Mashpi live:

One of the biggest challenges is analyzing such a vast amount of information. The development of mathematical algorithms that apply sound recognition technology using complex statistical models by Rainforest Connection has therefore been essential. These algorithms detect coincidences or similar patterns between the files transferred by the recorders with those of the acoustic libraries that serve as a basis to identify species of frogs, bats, birds, etc., all in a matter of seconds. In this way, the presence or absence of some species is detected and the acoustic diversity in each area is determined. Soundscape recordings are therefore incredibly useful tools for estimating forest health and landscape changes, while the sounds of each species separately help us to assess biodiversity, and even lead to the discovery of new species or at the very least, improve records of identified species.

In the Mashpi Reserve, each of the 10 Guardians has an exact name and location within the forest. Thanks to the platform’s artificial intelligence, a map of each acoustically-detected species has been and is continuously being created. In this case, the position of the recorders is represented by a point on the map, whose size changes according to the number of times the call of species was detected at a certain location. The algorithm also calculates the detection frequency according to the time of day so that we know the times of greatest activity, which in turn helps us to understand how species behave in each place.

Real-time monitoring empowers researchers and conservationists, but also citizens who want to better understand what kinds of actions are needed to improve conservation programs. It is used to evaluate changes in diversity over time, estimate impacts on population dynamics, and contribute to environmental education. In short, projects such as the Forest Guardians bring together scientists, conservationists and citizens every time they are participants in the benefits of the project and share the information obtained from the recordings.

The Forest Guardians project invites guests of Mashpi Lodge to reflect on the sounds of nature. In the future, they will also be active participants in the conservation projects that are carried out in the lodge’s reserve.

For now, explorers can learn more through the talks imparted by the lodge’s guides; they can handle Guardians in situ to understand how they work, and how their complexity is disguised as simplicity, at the lodge’s Science Lab; they can use the Rainforest Connection application from the App Store or Google Play to listen live to the sounds recorded by each Guardian; and can appreciate the experience of listening to the sounds of nature as background music inside the lodge’s dining room.