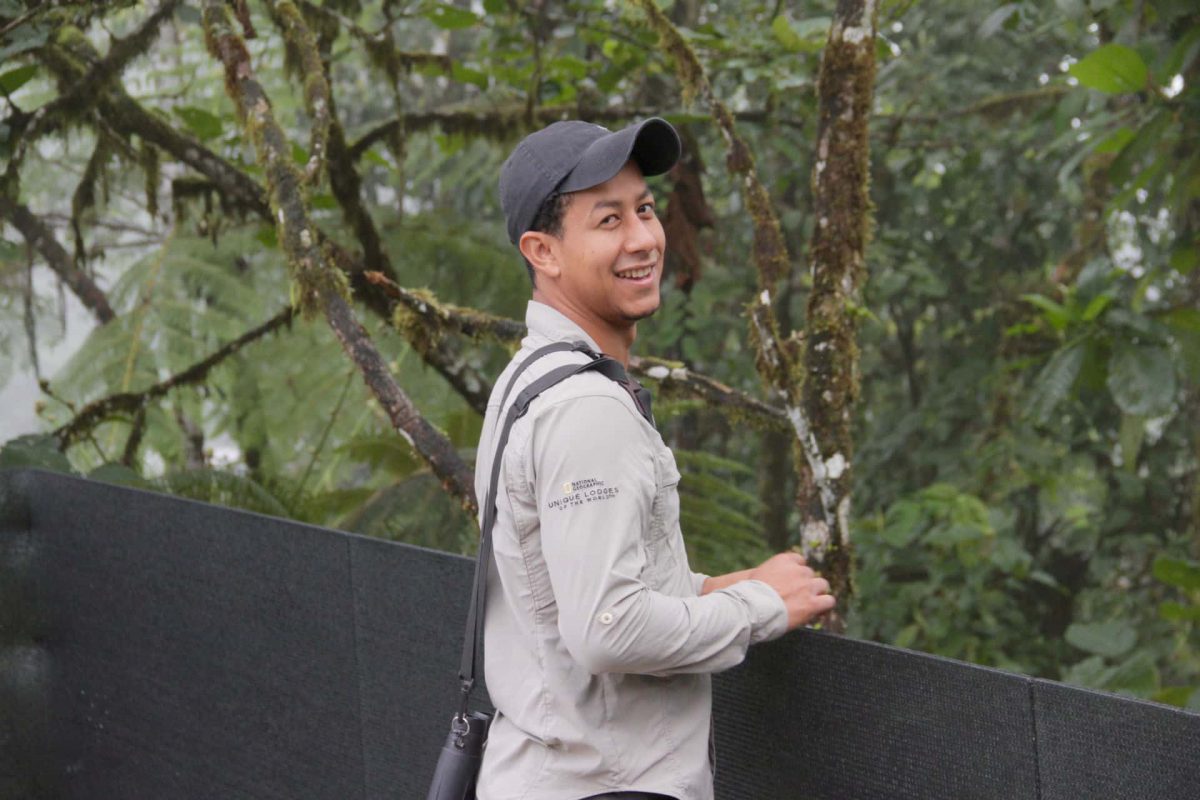 Manolo, age 25, works alongside his brother, Carlos, who is also a guide. He started working at Mashpi before his big brother, before the construction of the hotel had even begun, flattening the land where a wood mill had once been.

How did you come to work at Mashpi?

My uncle and aunt owned a property where the Butterfly House is today. It was them that encouraged me to come: to work and study here.

The idea here is to involve locals in each stage of the project, both to strengthen their communities and to further the environmental protection programs. Some 12 communities live around the reserve, each with a holding of between 30 to 100 hectares. Mashpi Lodge is incentivizing them to stop de-foresting the area, and to move towards eco-tourism. In fact, logging is illegal now: if they notice you’ve been cutting down trees you can be fined.

One day, when Mashpi was in its infancy, the expeditions manager spotted me going in and out of the forest, conducting my own investigations into butterflies. The manager recognized my ability and affinity with nature and pushed me to become a guide.

How did you learn English?

At school I learned a few words of English, but not much as people didn’t really take the class seriously. It was when I started working as a guide that I began to teach myself, watching movies in English for four hours each night. Sometimes I would be left alone with guests and I realized how much I needed to learn the language.

How has your attitude towards nature changed since you’ve been at Mashpi?

When we were kids we would kill birds for fun. The best ones were the big ones! They were the prize. That taught me about the behavior of birds, like which ones eat bananas, what time of day they come out. But now I use that knowledge to observe birds, to find the most unusual ones and help with their conservation.

Our parents were hunters. There were no roads. It would take four hours to get to the most basic shops. And their parents were “pioneers” in the area. They came originally to make a new life for themselves, they would just claim their own land. They had to cut down the trees there to prove it was theirs.

Then after 10 or 15 years, logging companies came and offered to make a highway, in return for their lands. And then there was 40 or 50 years of that deforestation, and the flora and fauna disappeared. There was such a lack of knowledge about wildlife: they’d call the big cats “tigers”!

Spider monkeys used to live here, now they’re gone. And the best trees around here, guayacan and copal, they were all cut down.

How do you get on with your brother, living and working together?

We have a good relationship! We don’t fight. Anymore…

What would you be doing if you weren’t working at Mashpi?

Some of my friends work on a hydroelectric project in Imbabura. The rest work in agriculture. It’s really bad for de-forestation – there’s no forest left! There’s soil erosion and they use pesticides. There’s a different mentality.

What have you learned here?

Part of work here is doing maintenance of the park and around the hotel. When you’re doing that, you’re learning the behaviors of creatures, like, tarantulas are territorial! Mashpi is our school, we keep on learning here.

Mashpi gives us opportunities to grow: some of us went to Santa Cruz island in the Galápagos to learn about the birds there and be able to compare with those that we have here.

Here at Mashpi the rain is delicious! I like to get wet, I sometimes go out without a poncho. My favourite time is when it rains hard.

What makes Mashpi so special?

We have lots of guests who come from Quito and say, “We never knew how amazing the birds are here,” and they rush out and buy a book so they can see what they have in their own back yard. For me that’s special, we’re spreading conservation. It’s so educational.

What do you in your free time?

There’s a gym and football pitch by the staff house. I’m actually in a football team in the community of Mashpi. Its name is Independiente, but everyone calls it Mashpi. On Sunday we’re playing the final against Pacto. Marc [Bery, the hotel manager] says that if we are promoted from the B division to A, he’ll buy us Mashpi-sponsored shirts!