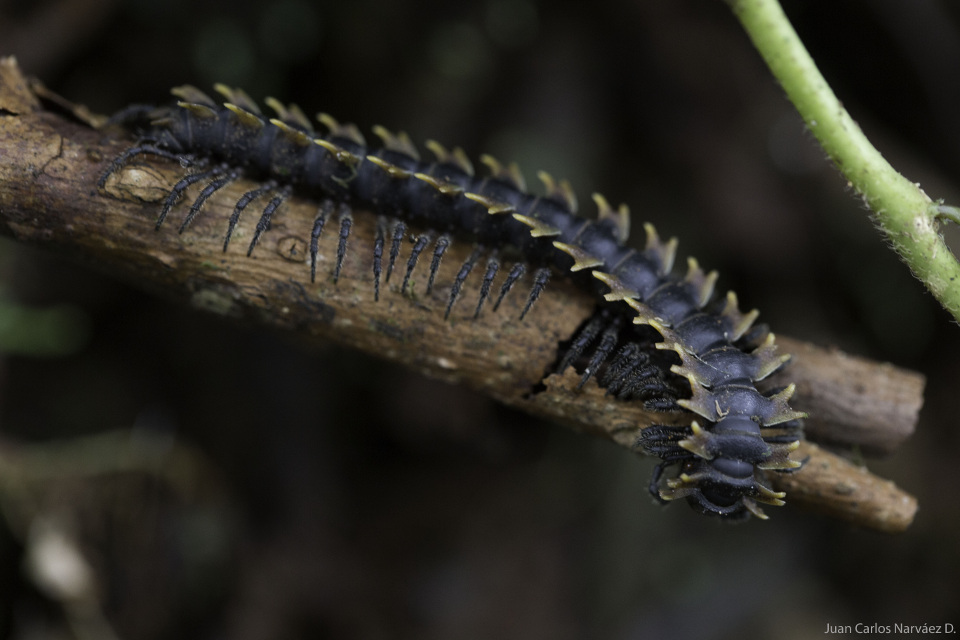 In the Ecuadorian cloud forest there is an army of soldiers ready and waiting, equipped with extensive and resistant armour and many, many feet. Their mission: deal with the endless leaves fallen from the trees, bushes and plants.

Millipedes don’t often live up to their name, but they sure do have a lot of feet. They are arthropods  (like spiders, and therefore they are not considered insects) who belong to the class of diplopods. This means that they have two pairs of feet for each segment of their bodies. In extreme cases they might have 700, but the majority of species don’t even reach 100.

In spite of their appearance and similar function within the ecosystem, they are not worms. The major difference is found in the feet (worms don’t have them). They are also similar to centipedes, but the difference is that, rather than having 900 less feet, centipedes belong to a class of quilopodes (Chilopoda). This class of quilopodes in particular only possesses: a.) a pair of feet per segment of the body and b.) oral appendixes through which they secrete venom. This latter feature is used for hunting, as centipedes are carnivores, while millipedes are almost always vegetarians.

There are a multitude of species, with some 12,000 having been identified. However, there are certainly many more species to discover, as they are distributed almost all over the planet, apart from Antarctica. They also inhabit a wide variety of ecosystems, usually forests. They are particularly present in deciduous forests like Ecuador’s cloud forest, or in forests in which a great many leaves fall, providing them with plenty of food. They are very resistant to extremely humid conditions. There are even species that can survive being submerged in water.

The role of millipedes in the ecosystem is very important. They are workers on the ground, in charge of decomposing organic material, which, together with bacteria and fungi, creates fresh, nutrient-rich soil. Such soil is a boon for the plants and trees. Furthermore, they are excellent excavators, meaning that wherever there are millipedes, a good oxygenation of soil and movement of nutrients will be found. Finally, millipedes are a source of food for other cloud forest species, such as insects, mammals, reptiles, birds and even amphibians.

As if their enormous collection of feet and incredible ability to bury themselves and to dig holes was not interesting enough, millipedes also have a trick up their sleeves: an incredible defence mechanism that beats even its bullet-proof armour. Millipedes of Ecuador’s cloud forest are specialised chemists who can create and stock certain substances in their glands, found in the leaves they decompose. They employ these substances to defend themselves against their predators. These substances might be cyanide, terpenes, and phenolic acids, among others. They act as excellent deterrents against would-be adversaries: they smell terrible and even burn upon contact.

More fascinating still is that there are species in Ecuador’s cloud forest that have learned that millipedes are great chemists. They therefore employ them in different ways, as if they were personal pharmacies. Some species of mammals, especially monkeys, have learned to use them as mosquito repellent and wipe their skin with them to ward off annoying bugs.

In Mashpi, you can easily spot different species of millipedes marching with their numerous pairs of legs among the carpet of leaves in the humid forest. It’s even possible to smell the strong substances that emanate from their skin if they feel threatened.

nextFascinating encounters in the forest