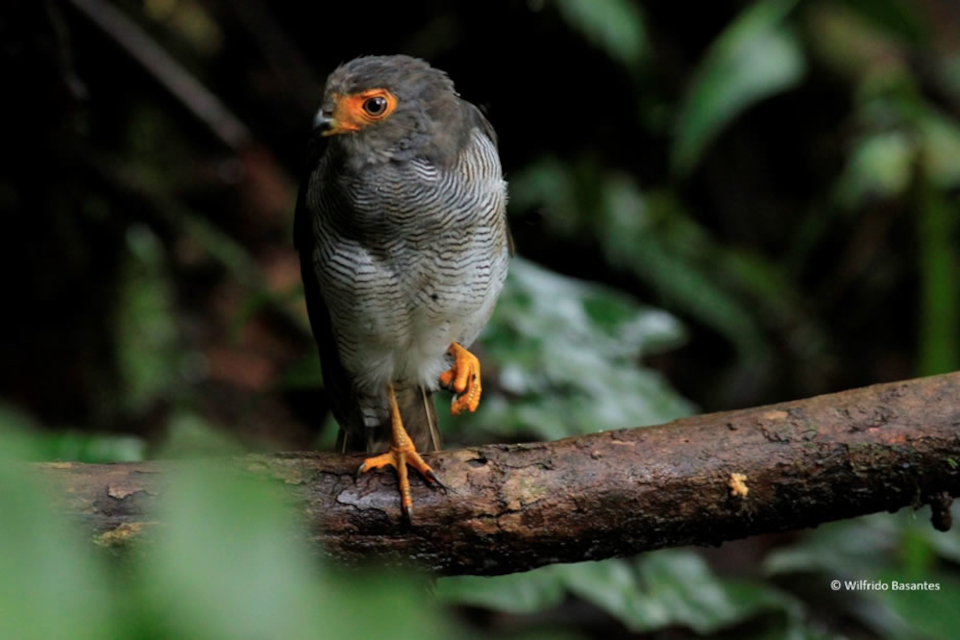 Three days ago, while I was following a group of ant-eating birds near the hotel, I was pleasantly surprised to see a tiny hawk. By the looks of things, it had been feasting on the birds, given the great flurry of feathers on the ground. The tiny hawk is a rapid diurnal bird that lives in the Neotropics. It has the best vision of all birds and it is very fast, capable of catching a hummingbird in flight. They are very patient while hunting, waiting camouflaged in vegetation for the perfect moment to leap out at their prey.

Phallus indusiatus, colloquially known as the bride’s veil, is a fungus of the Phallaceae family that appears in soils enrichened by woody remains well decomposed by the tropical climate. They can be found in the south of Asia, Africa, Australia and America.

Their stench of rotten meat attracts insects that help to disperse their spores. Wrapped around the stalk is the indusium, a thin, membranous covering which in the case of this fungus is shaped like the bride’s veil from which it takes its name.

It was spotted on one of our excursions in search of a new path in the rainforest in the Ecuadorian Chocó region.

While I was walking along the path towards Tower Four (Canopy Station) of the Dragonfly, I witnessed an interesting behaviour of leaf-cutter ants, and spent a long time learning how it was that they could cut leaves.

The underground nests of leaf-cutter ants stand out like a sore thumb in the lowland forests. The 0.2 hectare (half an acre) of exposed clay and mud is completely devoid of undergrowth plants.

Up to 5 million individuals live in a single colony. All day long, columns of ants carrying small pieces of leaves or flowers enter holes in the ground, passing a steady stream of ants on their way out. The columns of ants extend from the colony via cleared paths to the trees under attack. Their activity usually ceases at nightfall and during extended rainy periods during the day.

The leaf pieces are cut with the sharp mandibles of the large worker caste and carried by them like an umbrella back to the nest. Many of these workers are susceptible to attack by flies and wasps trying to lay eggs on them that will later emerge and consume the worker.

With her jaws occupied carrying the leaf load, she cannot protect herself without dropping the leaf. Instead, small caste ants often ride on top of the leaf where they can challenge approaching danger and keep it at bay.

In the nest, special galleries are set aside where the leaf bits are received by other workers. These leaves are not food, but instead they are scraped clean and then added to underground gardens. Here, a specialised fungus grows on the leaves and produces a spongy layer that is eaten by the entire ant colony and fed to developing larvae. If a queen ant leaves the nest to start a new colony, she must take a mouthful of the fungus to use as a starting point for food in the new colony.

This farming behaviour is important for the forest because it quickly moves immense amounts of nutrients through the system. The ants are very fussy about which plant species they incorporate into the undergrounds gardens: the chemical contained in the leaves of some plants species inhibit fungal growth and are thus avoided by the ants.

The moss-backed tanager and the palm viper

One afternoon, I was setting up to take some photos of a viper (Bothriechis schlegelli), known as the palm viper or ‘padlock head’, as we call it here. I began to notice a very striking behaviour in a moss-backed tanager. We call it the Mashpi tanager as it’s the one depicted on the Mashpi Lodge logo.

The moss-backed tanager is a species that is found in mixed flocks. Its warning song for other birds is very attention-grabbing when it finds itself close to something that could be dangerous.
The interesting thing is that it was thought that this song was only delivered to warn other birds, yet, in the video we can clearly see that this bird was trying to warn me about the viper that was very close by.

It’s amazing that the more I ignored her, the closer she got, coming up to about 40 cm away from me, as if to tell me, “Don’t get any closer, you’re going to get hurt.”

She kept on repeating her warning song until I got further away from the viper. Then she flew off in peace.

Nature is incredible and each day it surprises us with new experiences and anecdotes that form lifelong memories.

previousTanagers: The queens of the new world