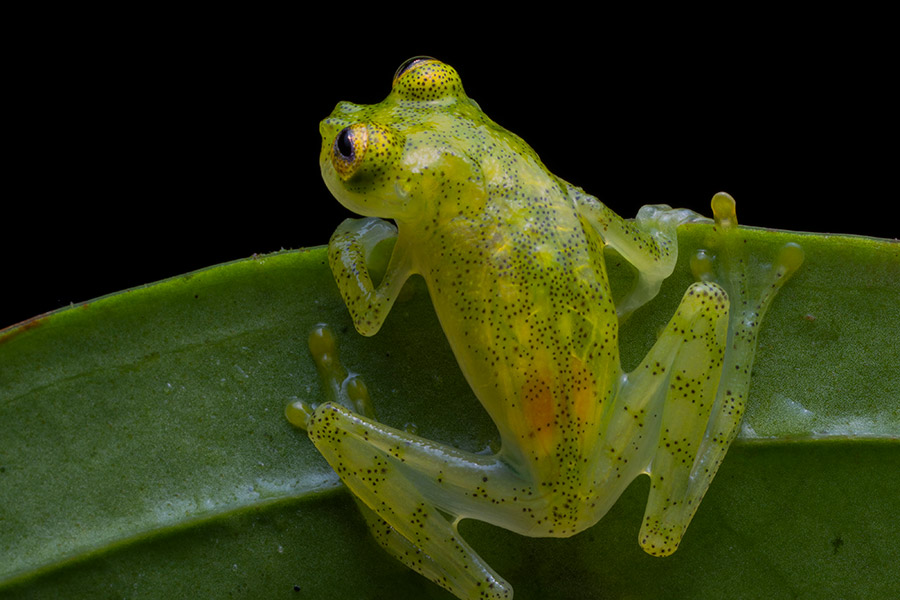 It’s hard to imagine that a visionary tourism project like Mashpi Lodge is in fact the result of the simple desire – which to many would sound slightly unhinged – to protect the forests northwest of Quito, Ecuador’s capital. But that’s exactly what happened when, in 1999, the Mashpi project began, acquiring 600 of the 2,500 hectares that today make up the Mashpi Reserve. Since then, a highly capable and committed team has continuously developed strategies and actions to guarantee the forest’s conservation, as the perfect complement to the responsible tourism operation at the lodge. One of the pillars of this strategy is scientific research.

The work of researchers, both from the lodge and allied institutions, allows us to gain a greater understanding of the forest. With and through this knowledge, we can create an unparalleled experience for our guests, while simultaneously working to maintain a healthy ecosystem and a culture of lasting sustainability in the region. 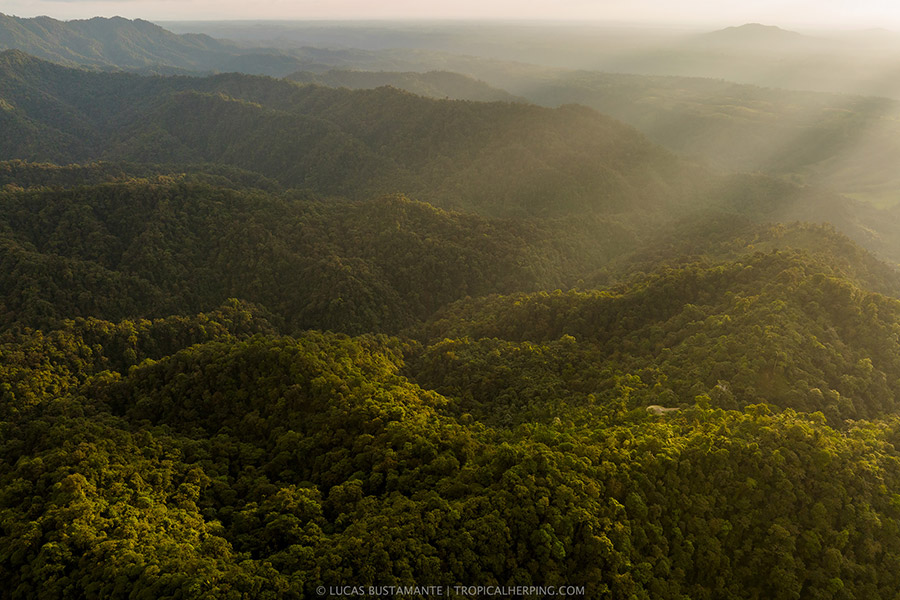 Ecuador is one of the planet’s most megadiverse nations. However, most of us know very little about the work and dedication involved in actually studying and classifying this diversity. To give you an idea of the scale of the challenge and Ecuador’s importance, the country boasts 20% more animal and plant species than the entire United States, a territory 35 times larger!

In the Mashpi Reserve alone, since the lodge’s opening 10 years ago, we have been part of the description of nine new species for science, including the Magnolia mashpi, Hyloscirtus mashpi and Lepanthes mashpica. 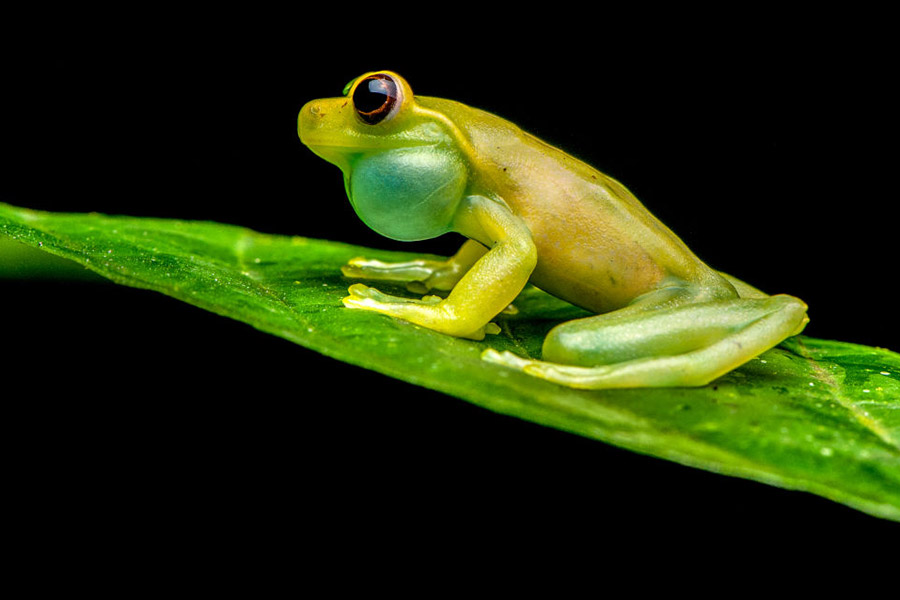 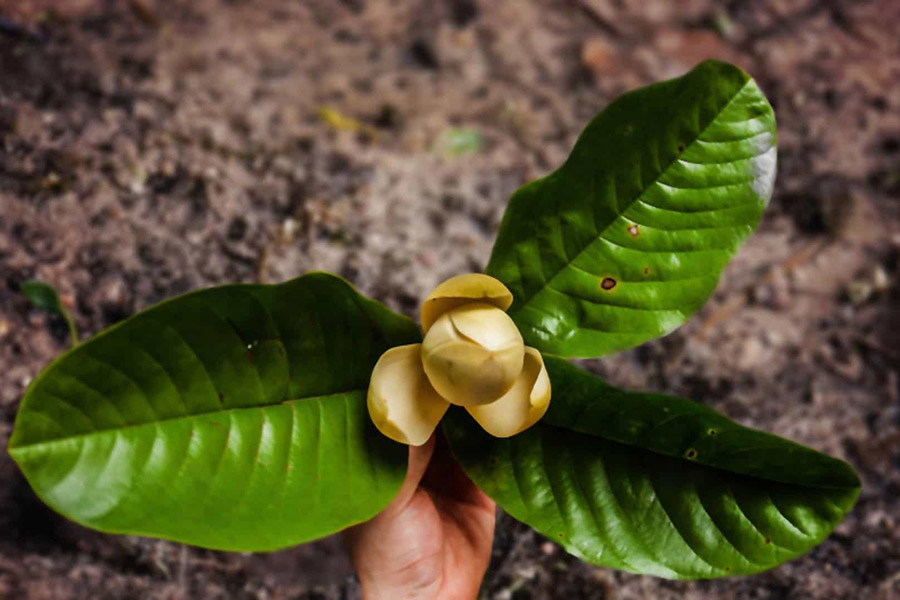 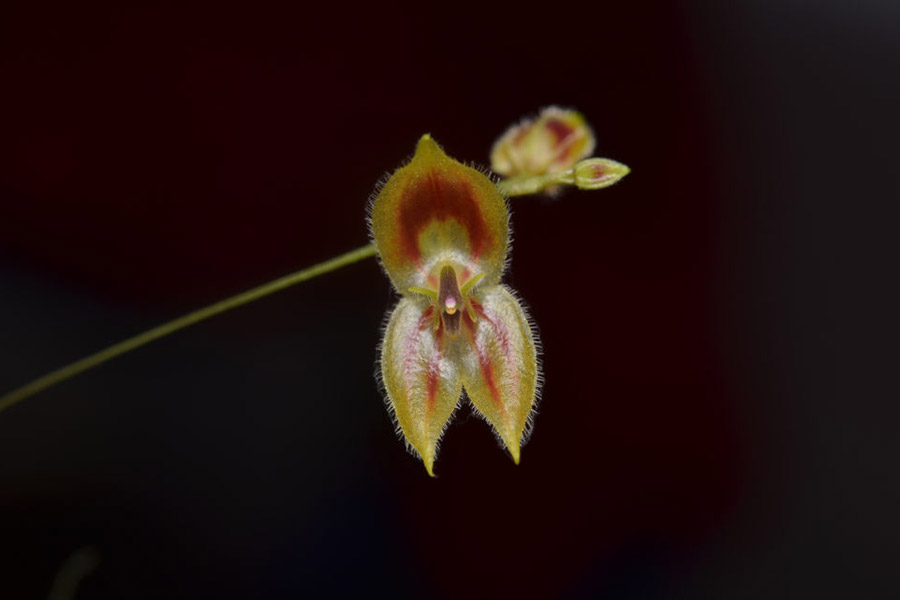 It takes curiosity, scientific rigor, commitment, and teamwork to describe a new species for science. Today we have the pleasure of sharing probably the most beautiful and unique frog in all our reserve: the Mashpi Glass Frog (Hyalinobatrachium mashpi). 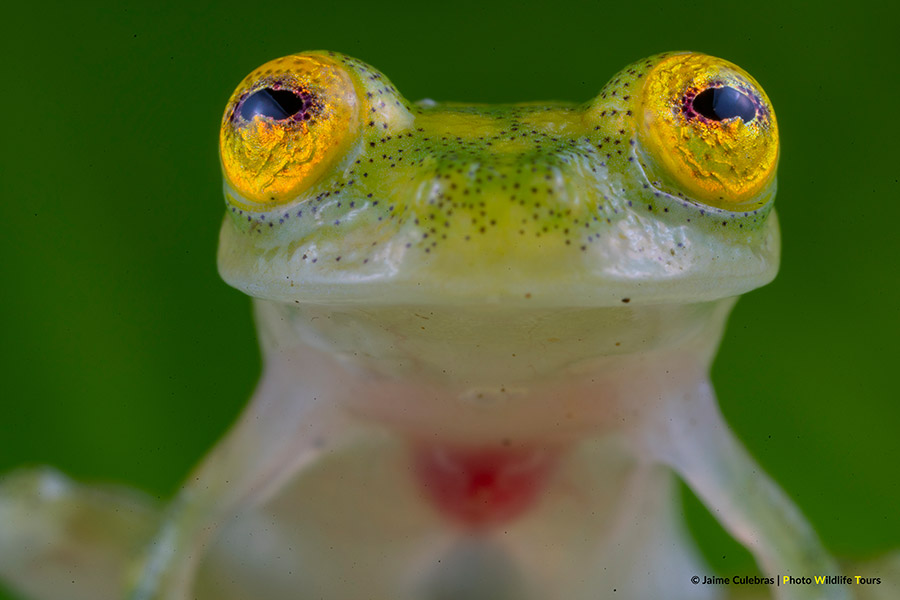 In 2014, a team of researchers, including Carlos Morochz, then Director of Research and Biology at Mashpi Lodge, began a diversity monitoring study in the surrounding reserve. In December of that year, after a few hours tramping through and along the banks of the Amagusa River, the light of the team’s flashlights lit up the body of a creature no more than 2 cm big. It was an extremely transparent frog, which the researchers could not identify with certainty, despite their extensive knowledge of these forests and their inhabitants.

This was the first clue that it might be a new species.

The intrigue and excitement caused by this first sighting of the frog led to several more outings, at night, in the rain, for hours on end. Once the first year of monitoring was over, doubts about the species remained. Despite all the efforts of the researchers to collect as much data as possible about this elusive frog — which likes to hang out high up in the trees around rivers, not close to the ground — the evidence remained scarce. Without a doubt, more studies were needed to help find answers.

Finally, in September 2019, the researchers managed to record the frog’s distinct call and thus complete the puzzle — almost five years after finding the first individual!

Click here to listen to the Mashpi Glass Frog!

With the field data complete and firm evidence to indicate this was a new species, the morphological, acoustic, and molecular analyses were carried out. This research was made possible through the combined efforts of Mashpi Lodge, Fundación Futuro, Universidad San Francisco de Quito, University of California Berkeley, University of Bern, Photo Wildlife Tours, and Tropical Herping. 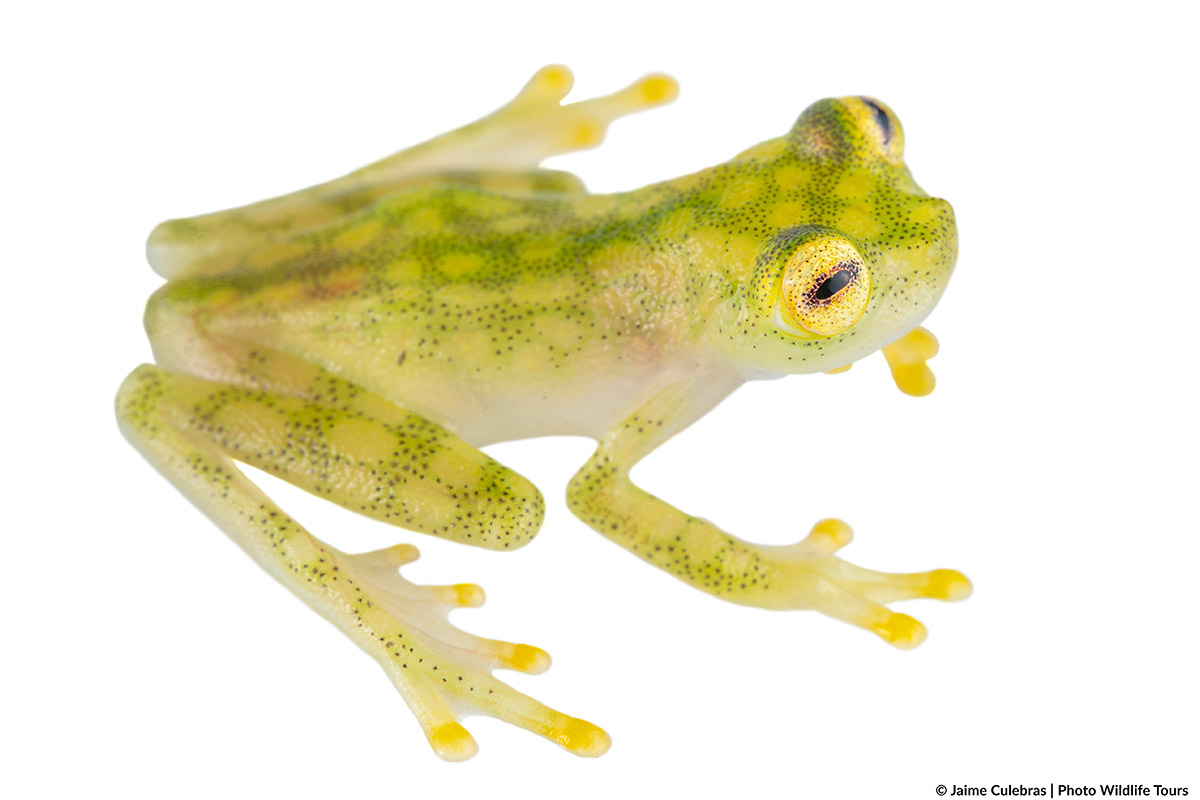 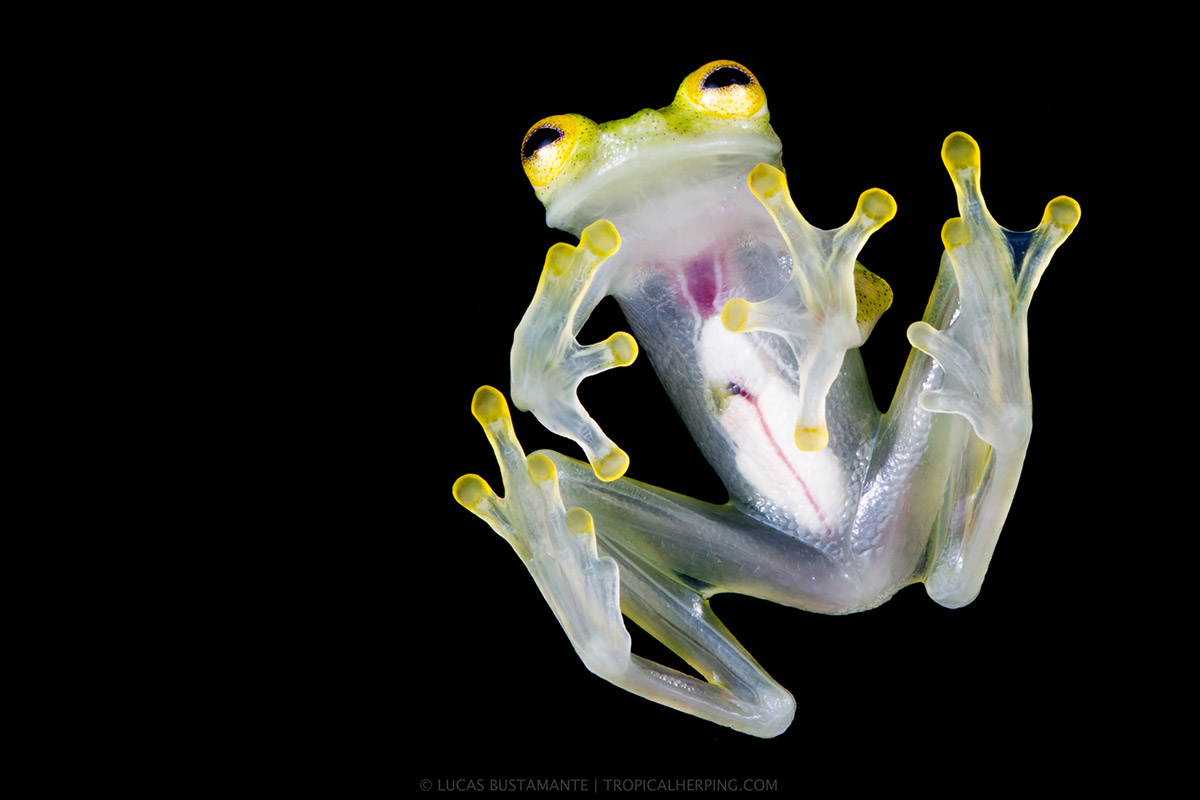 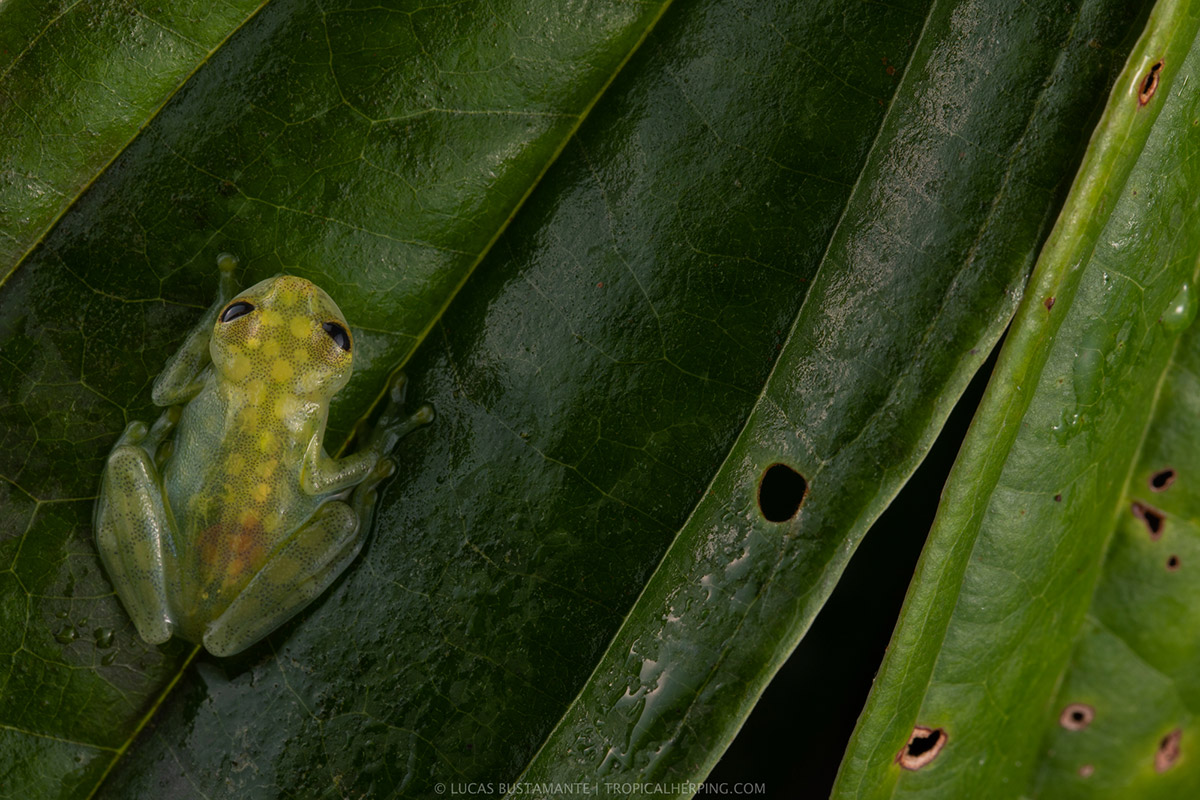 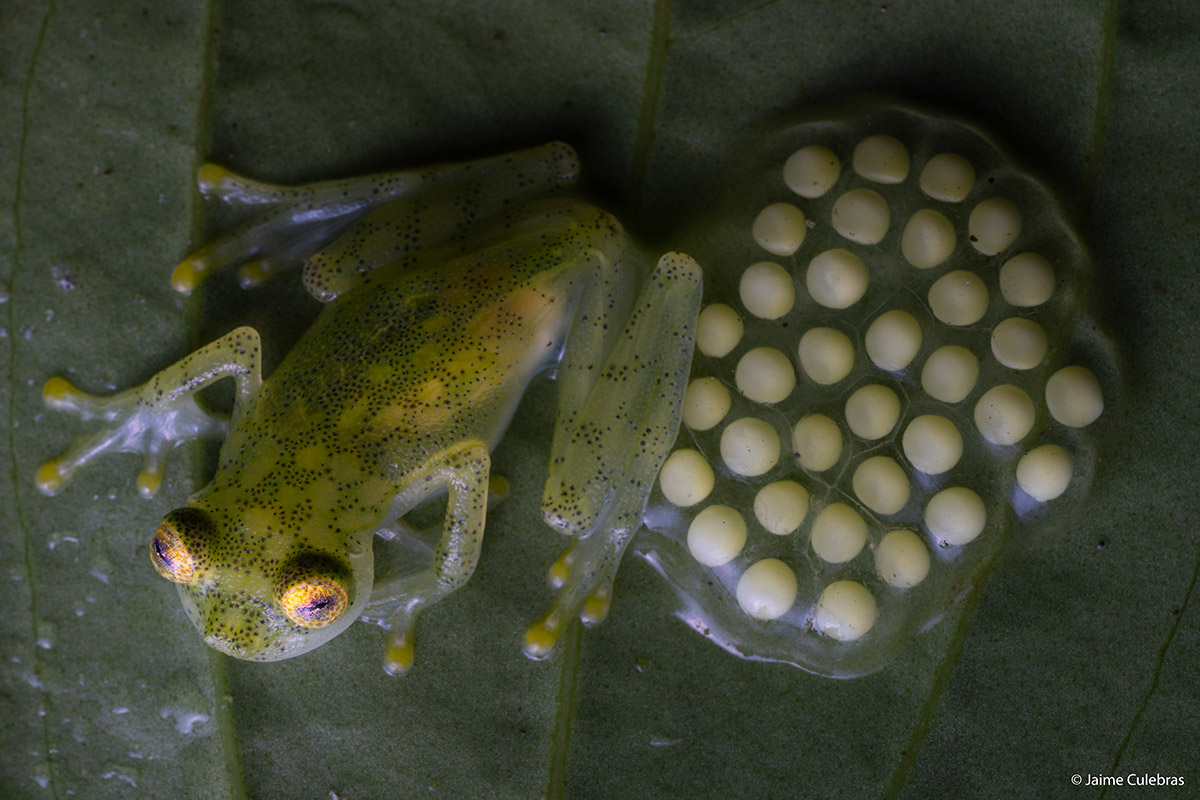 It is amazing that in the 21st century, the forests near the most populous city in the country continue to surprise us. The forests of the foothills of the Northwest of Pichincha, especially the protected forests such as those of Mashpi, represent unique natural heritage. They are a living laboratory of speciation.

The results of the analyses revealed that there were in fact two different species: one from the Cordillera del Toisán and the other from Mashpi, separated by the valley of the Guayllabamba River and the Intag River. Hyalinobatrachium mashpi and its sister species Hyalinobatrachium nouns possess the same morphological characteristics, but, being geographically separated, they have differentiated genetically. This is the wonder of speciation!

To better understand this evolutionary process, let’s imagine a population of frogs that long ago inhabited the same territory. Due to ancient geological processes, they became separated. Now we have a population on one side of the river and another on the other. These geological events, in a geography as complex as that of the Andes, cause the two populations to lose contact with each other for many years until they differ, to the point that their genes differ. Speciation in the Andes, apart from being intriguing, is a key factor at play, because it generates endemism. In other words, these species live in very geographically-restricted areas. This also makes them highly vulnerable to any change in their habitat.

We’re very proud that Anderson Medina, who hails from the nearby village of Pachijal and joined the Mashpi Lodge team as a research assistant when he was still in his teens, is today co-author of the description of the Mashpi Glass Frog. People who have known Anderson from his first years at Mashpi describe him as a restless boy, who accompanied the researchers wherever they went of his own accord, and gradually acquired greater and greater knowledge about biology and research. Anderson has known these forests since childhood and now works to protect them. Today, he’s a staff researcher at Mashpi Lodge and a key ally to all researchers who come to investigate the wonders of the Mashpi Reserve, whether Ecuadorian and international.

The discovery of this new species is undoubtedly important for the scientific community and for Ecuador. It shows the importance of the articulated work between Mashpi Lodge’s Research and Biology team, academia, and local institutions, who, together, continue to add evidence about the importance of protecting the biodiversity and endemism of the Chocó forests.

Research can also provide new opportunities for local young people to connect with their lands and generate livelihoods for themselves and their families.

Have a look at these photos of the Mashpi Glass Frog by Carlos Morochz! 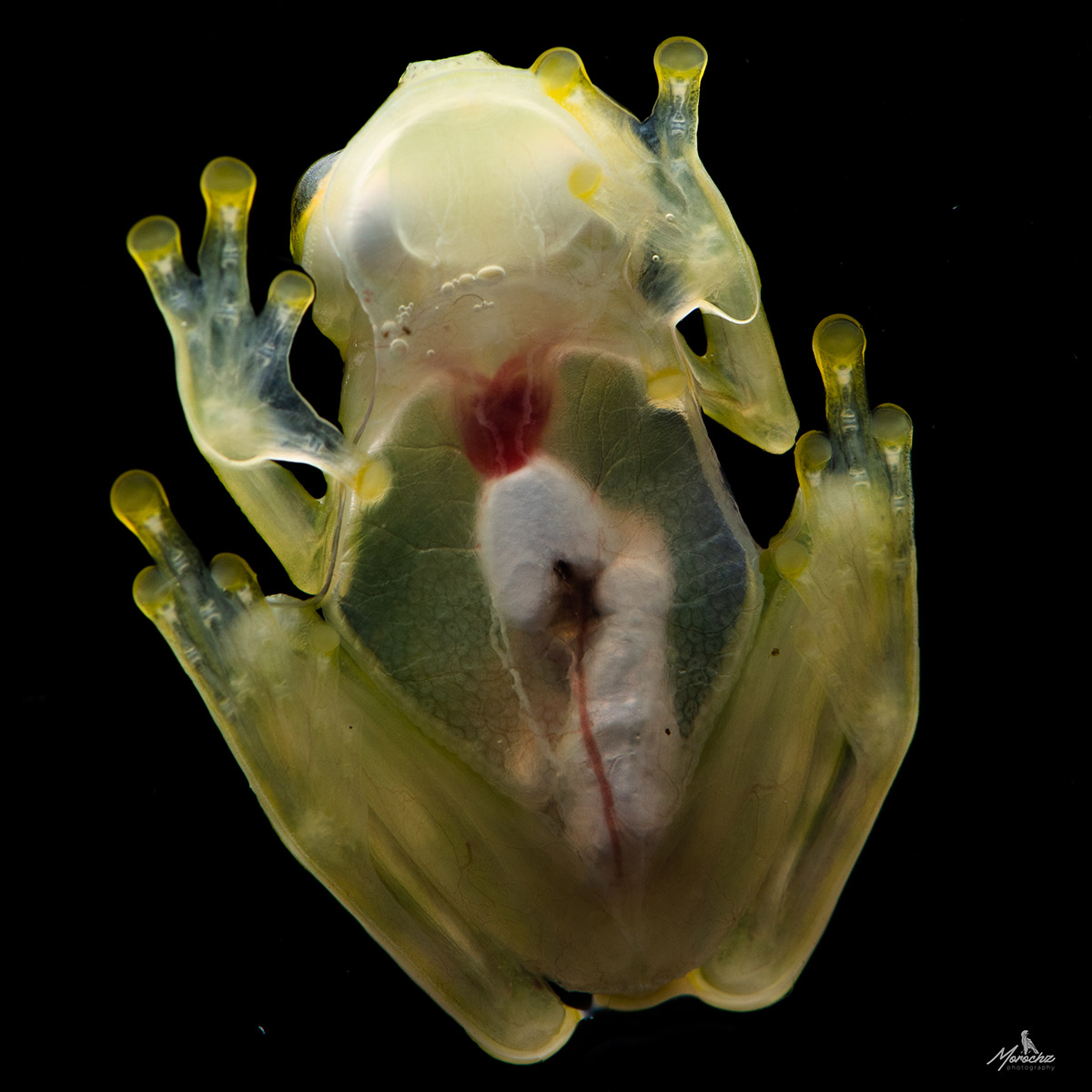 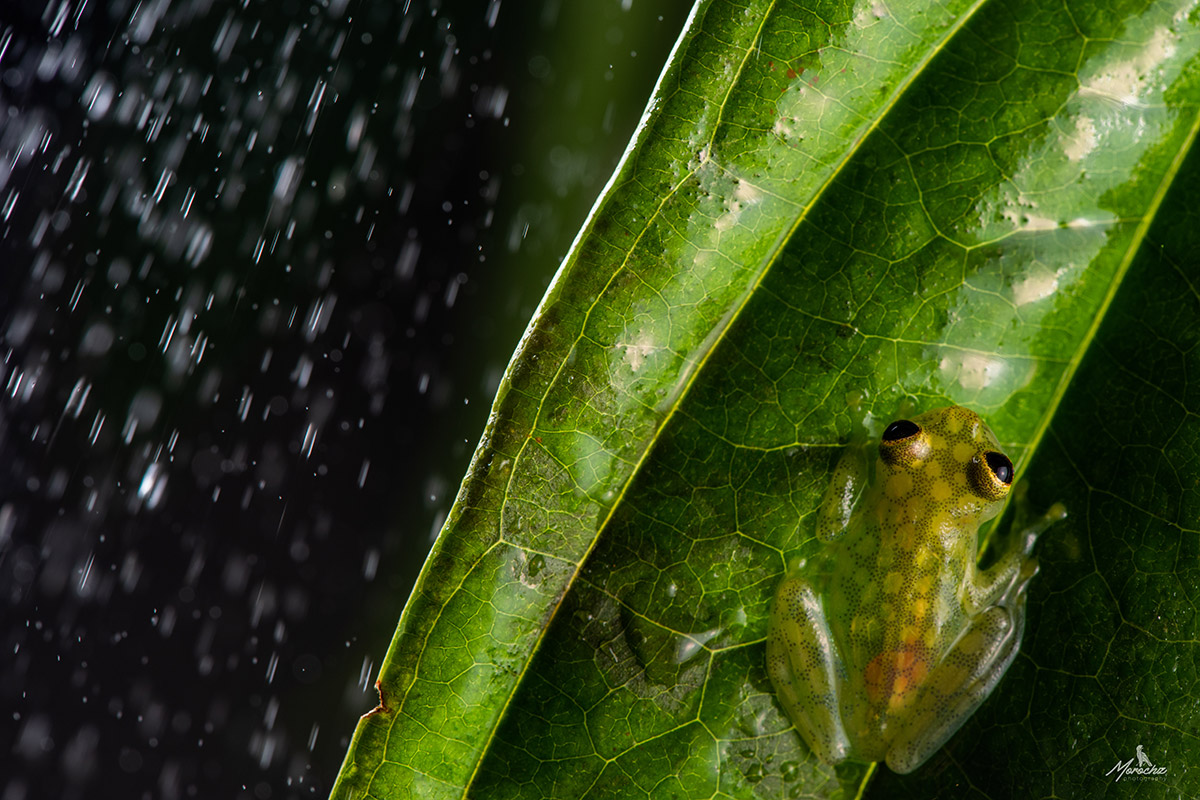 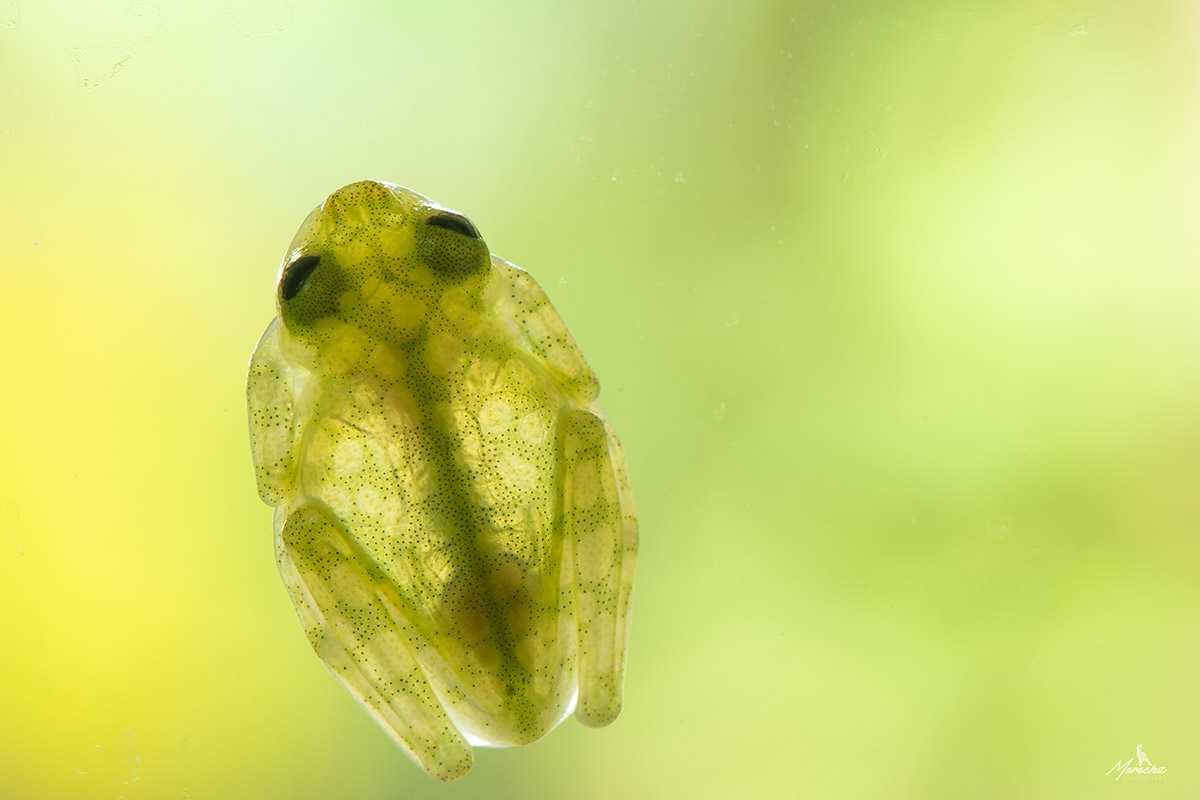 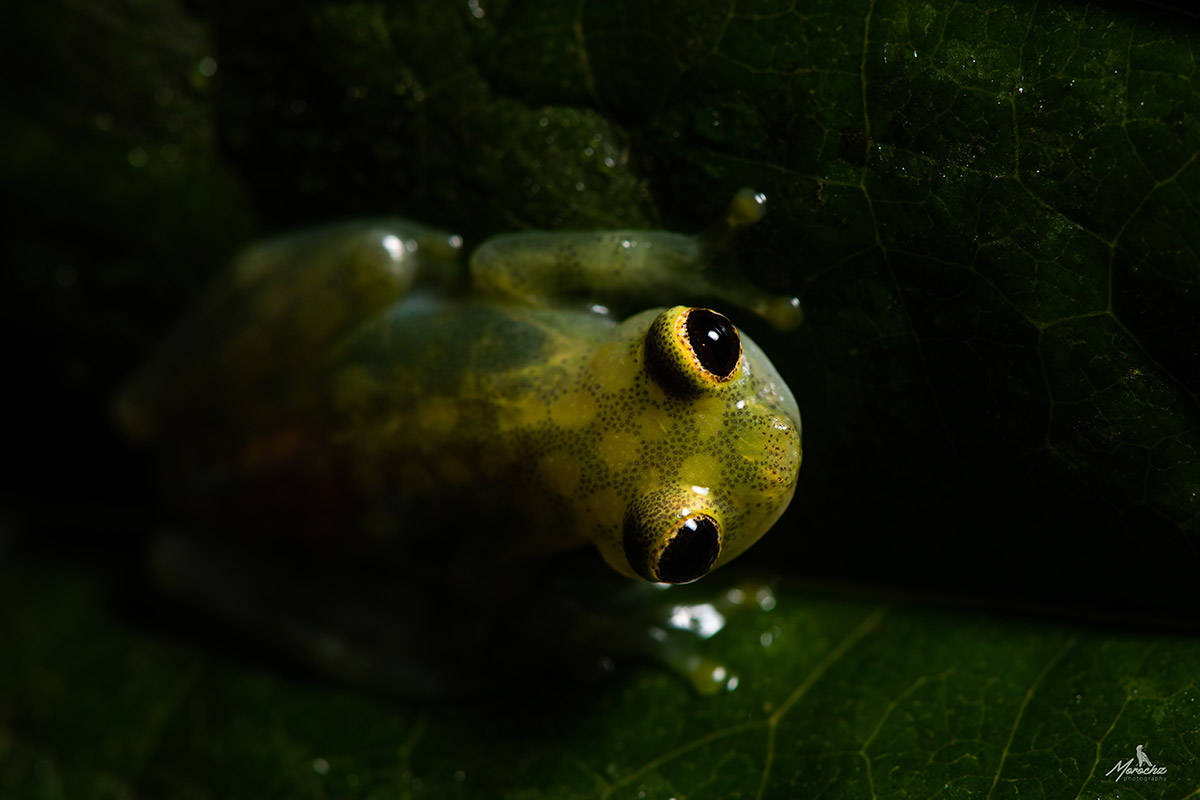 Research inspires and nurtures personal and institutional commitments to biodiversity. That’s why research has been a fundamental pillar and a priority since Mashpi’s inception over 10 years ago.

We would like to sincerely thank each and every one of our guests, who, through their visits to our reserve, not only contribute to the financing of these investigations, but also return home as ambassadors for this globally-important and beautiful ecosystem.

You can read the full scientific paper here.

previousMeet the Guardians of the Mashpi Forest