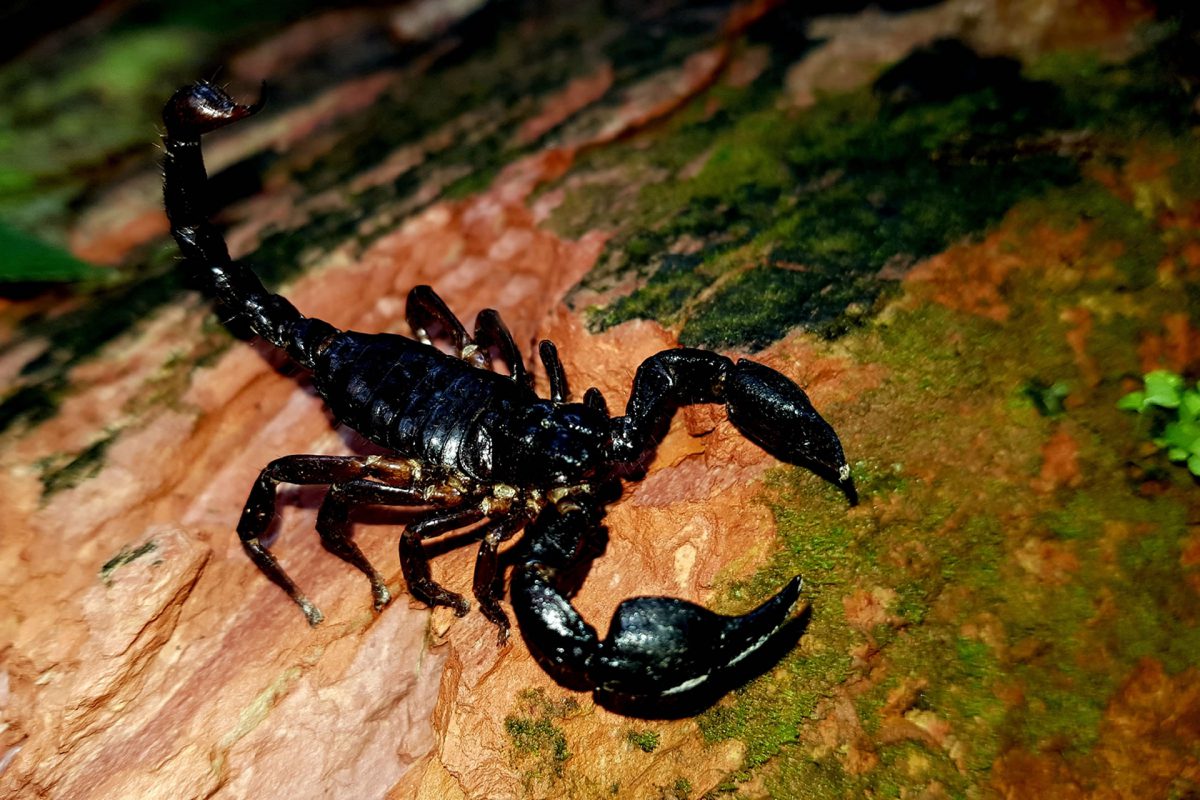 On one of our night walks, we came across one of the most known, and feared, arthropods in the world. These beautiful arachnids have an alarming appearance but it is perhaps just our own terror that has brought about their dark reputation. Scorpions are distributed around the world, with the exception of the extremes of the hemisphere, due to the cold. These arachnids are nocturnal animals.

There are almost 2,000 species of scorpions, although only 30 or 40 have a venom strong enough to kill a human. However, they have been deeply feared for time immemorial. Despite the killer species numbering so few, their poison can be strong enough to kill children younger than eight years old if certain steps are not taken.

In Ecuador there are 47 species of scorpions distributed around our four regions.

There is no exact rule to distinguish the dangerous species from the harmless ones, even though it is said that scorpions with low toxicity usually have very strong pincers while their tail is short and weak; the dangerous species have fine pincers and long tails. The colour is not a factor that helps to determine how lethal they can be.

The numerous types of venom are perfectly adapted to the lifestyle of each species, specialised to have the maximum effect against their respective prey. Scorpions usually feed on insects but their diet can be extraordinarily wide, a key factor in their survival in such hostile environments. When food is scarce, the scorpion has the amazing ability to slow down its metabolism up to only a third of its normal rate and subsist with just one insect per year. Even with the metabolism slowed, the scorpion is able to leap on its prey when the opportunity presents itself, a gift that few hibernating species possess.

Just like spiders, they are arthropods that have eight feet and their differentiating characteristic is their long tail that ends in a segment that contains glands where the venom is found, as well as the needle to inject it. They also have two strong talons at the front. Despite the fact that they have eight pairs of eyes, these are not particularly useful in detecting their prey, which is why they use their mechanism to detect air currents and vibrations on the ground.

Request Information
Call us
Chat with us