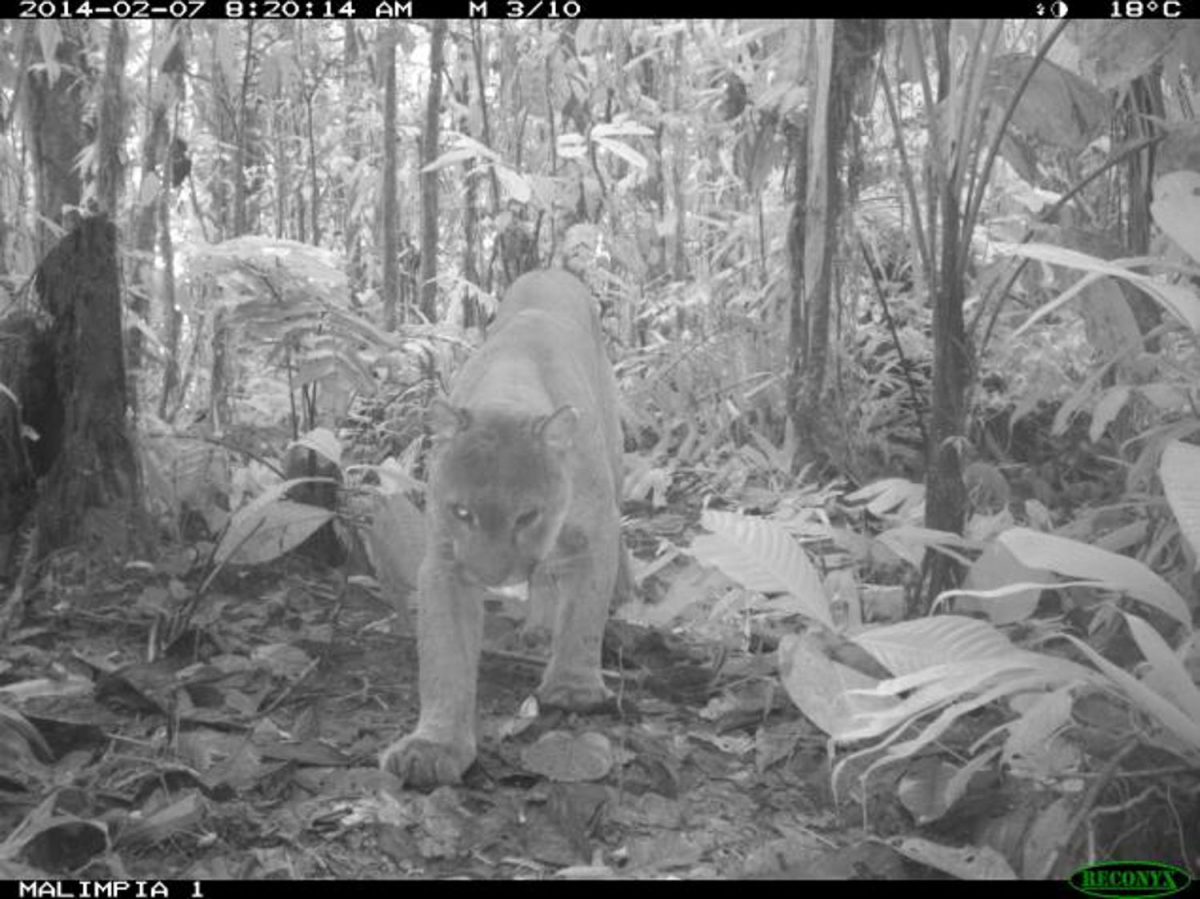 The forests have spies; guardians that try to detangle the mysteries guarded by the woods, to understand their dynamics and through knowledge and science protect the most sacred and mystic places on the planet. Custodians in the form of biologists, ecologists and other students of life spy on the creatures that move among the leaves, the canopy and the ground.

Investigation work in a humid tropical forest like Mashpi’s is no easy feat.

Everything in this ecosystem is camouflaged and designed, with sharpened senses, for survival. To detangle these mysteries, resources are required, plus bravery, a good eye for detail, and more than anything: patience by the truck-load. Years could go by in search of a particular species within the rainforest without finding it. Biologists and ecologists who work in places like this have had to be very creative and to use complicated formulas and mathematic models to find answers to their questions. They’ve had to spend hours in on the field, registering tracks in mud among fallen leaves to be able to know which species inhabit each forest and only with a lot of luck are they able to come face to face with one of the elusive creatures of the forest.

Because of this so much remains unknown, but with the help of technology, huge advances have been made in a short space of time, obtaining information that before had taken 10, or even 20 years, or perhaps had never even been managed.

Camera traps have provided incredible support to ecology, biology and conservation in places like Mashpi and are without doubt the most efficient tools in biological espionage

Traps have been a widely-used methodology in these fields of science for decades, centuries perhaps. Sometimes the only way to see the species of interest was to physically entrap them with cages and bait. It was a challenge to avoid frightening off species with a heightened sense of smell and hearing designed to detect the presence of any danger, including the presence of humans.

In the past, that was the only way to observe many species, and still is used for specific studies. But this type of sampling is logistically complicated, needs resources and also implies the risk of physically manipulating forest life.

When roll-film cameras appeared, a new world opened up for trappers, who set about creating the first camera traps in robust boxes and adapting them to complex sensors and battery packs, minimizing and even eliminating the need to manipulate animals and entering hidden into forest life – like a spy.

The birth of photo-trapping paved the way for many investigations that before were unimaginable and were impossible to execute due to the difficulty of observing the animals in question, particularly mammals of the Andean humid tropical forest.

In the last decade, with the development of digital cameras and even more with the existence of commercial camera traps, a photo-trapping boom has taken place and in this way new discoveries and advances for conservation have been made. The first camera traps could not be found on sale, they had to be designed and constructed by each individual investigator. Now there are all kinds of camera traps on the market to suit each and every study and budget. With these marvellous tools, samples of biodiversity can be made and the presence of threatened or extremely elusive species confirmed. The abundance of species and individuals can be measured when they have unique characteristics that differentiate them from the rest. Density can be measured, as well as the survival rate of each individual or species; even the ranges of life can be estimated as well as the migration of species that before were only known in fiction books because they were impossible to see in “real life”. Camera traps are an incredible tool to measure the health of forests and to support their protection. 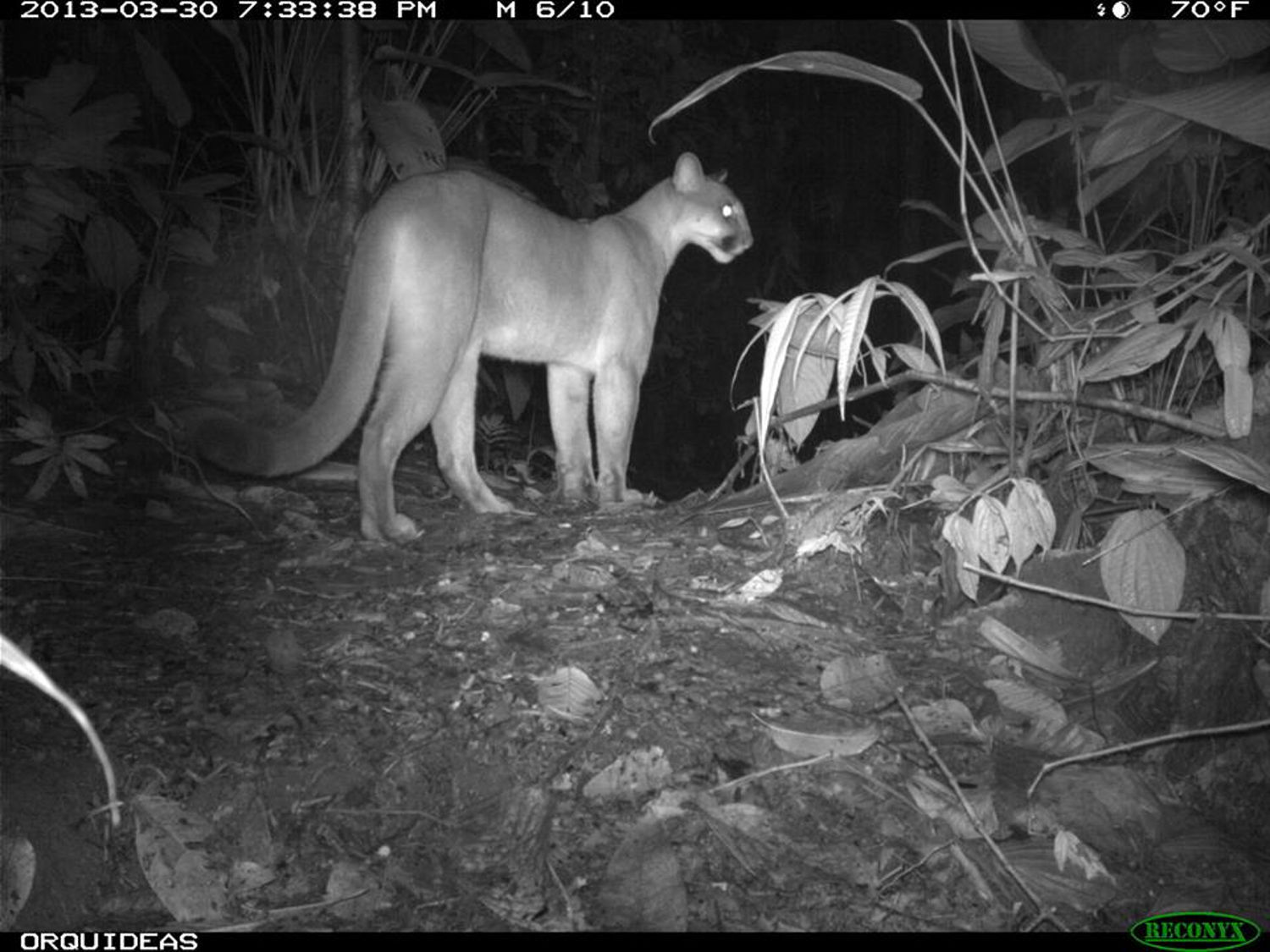 The Mashpi Reserve also is part of this great trap revolution, where the spies that are dedicated to observing the life of the reserve have placed cameras where they subtly monitor all types of mammals that roam around the under-forest, from the small rodents to the great cats like pumas. They also register distinct species from the birds that roam this stratus of the forest. Many camouflaged cameras have been placed at ground level in key places, identified by the observation of distinctive tracks.

The location and distribution of these cameras is important because they define the type of study to be undertaken, and in the case of the Mashpi Reserve, as well as identifying which species exist, the camera trap project seeks to discover the density of species, their distribution, behaviour and the movement of individuals that can be identified by key characteristics. In this way perhaps, they can attempt estimate the tendencies of their populations.

For this reason, a grid was designed of the sampling area within the reserve with geographic information systems. The cameras are placed in each square of the imaginary grid. Then, through mathematic formulae, an infinite number of things can be calculated with the images obtained from the cameras, like occupancy, density, abundancy and more.

The cameras function with two sensors, one that is activated with movement and another with heat. For this reason, they are principally used for the study of mammals and birds. They are placed on ground level and when an animal crosses their field of vision, they take various photographs and even videos. As well as these marvels, the cameras mark each image with the date, time, temperature and lunar phase.

An investigator placing a camera trap in Mashpi

For Mashpi, the images obtained are a real treasure: not only have they allowed the observation of species that were not believed to be in the zone due to the immense deterioration of the Chocó biodiversity region over its interaction with humans, but they also have opened the door to understanding the health of forests of the reserve, creating a base line that permits the monitoring of the forests on the long term, ensuring their preservation.

It has been possible to document a great number of species of mammal like pacas, agoutis, anteaters, armadillos, tayras and many more. Some very difficult to spot species like deer have already been clocked by the cameras. Even more interestingly, the most slippery and elusive to see have been observed and registered: the felines. 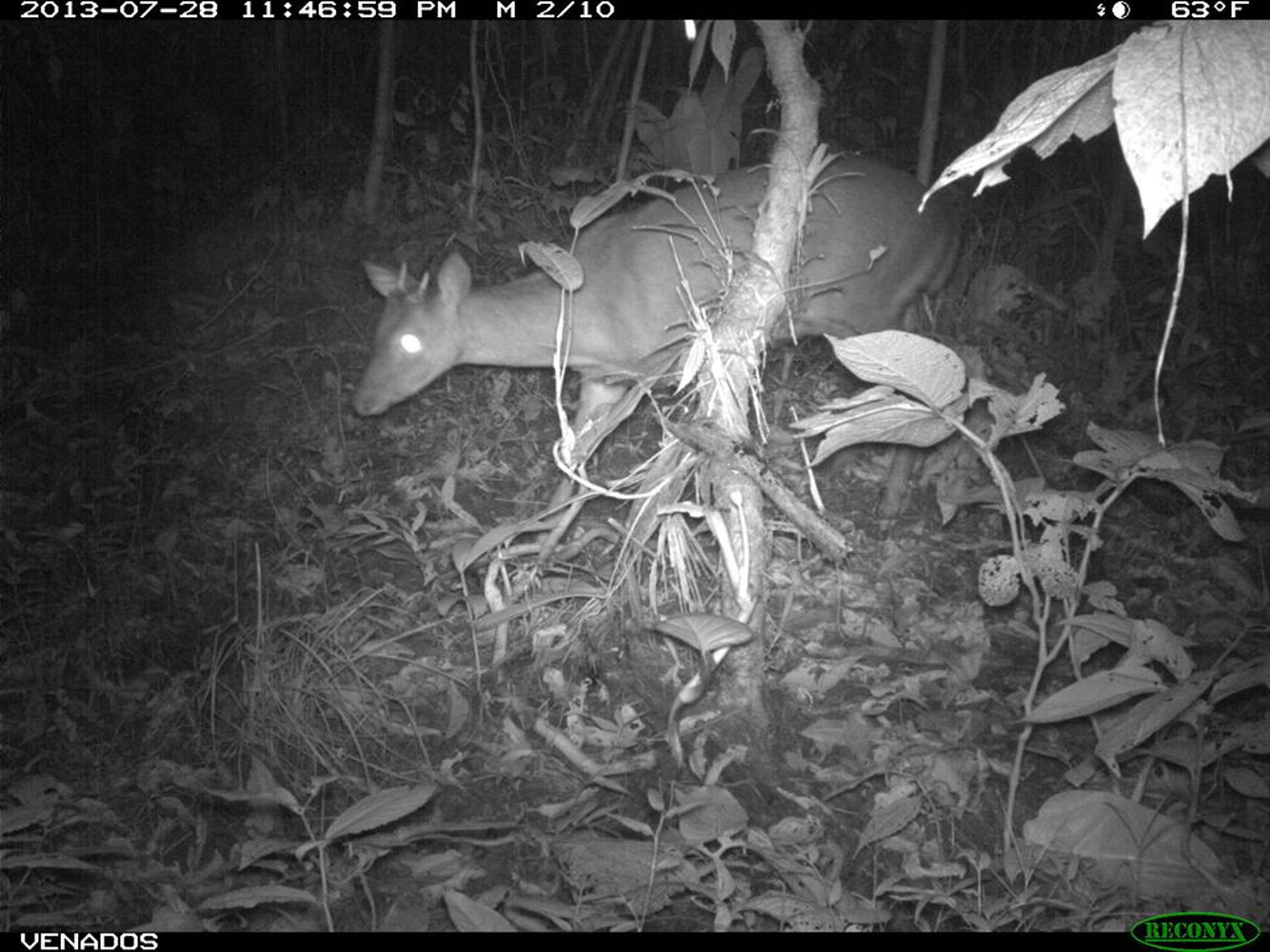 A timid deer is seen in one of the camera traps of the reserve.

Felines are the most impressive of all the images that have been obtained in the camera traps. Up until now, four species have been observed: puma (Puma conconolor), ocelot (Leopardus pardalis), oncilla (Leopardus tigrinus), and margay (Leopardus weidii). This is an excellent indicator for an ecosystem – the presence and abundance of top predators, those that are in the highest part of the food chain, and especially the large ones like pumas that require enormous extensions of land to survive. Juicier still is that the cameras have been able to recognize individual pumas that have distinctive traits, like scars or special colouration. Up until now, a male and some females making up his harem have been observed. It is believed that the reserve meets the needs of the family of this specific male which means it has the correct area for its life range. 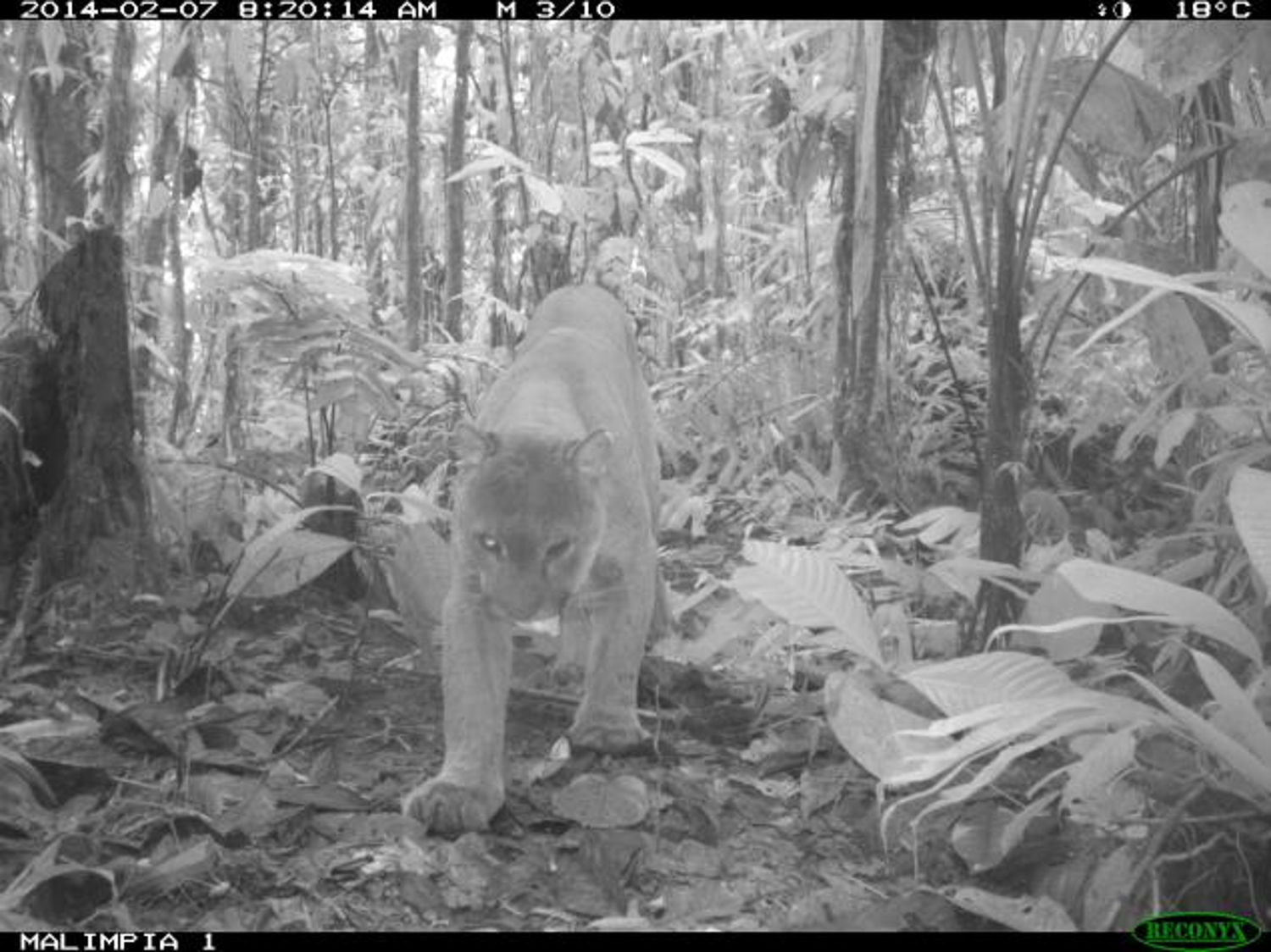 An investigator can go years in the forest trying to see with their own eyes the rarest and reticent species and not spot them, knowing that they themselves are being watched by those that they seek.

So who is the real spy?

The biologists seek to observe and understand, but biology and evolution stripped them of the ability to do so discretely, without being observed. The only way to be real spies of the forest, as the creatures are, is through technology.

Camera traps are the eyes that observe what before was impossible and thanks to this tool, more species and a greater area of forest can be protected. Scientific investigation, with its numbers and formulae, is incredibly important for conservation, but the images have power, the power to change incredulous minds, the power to confirm what had been guessed, the power to transmit beauty. The images that they capture confirm the presence of incredible creatures and motivate us to want to care for them. In this way this biologic spy tool also has the force to change human mentality and to spark conversation, with just an image.

previousThe cock of the rock: The cockiest of all the rockers