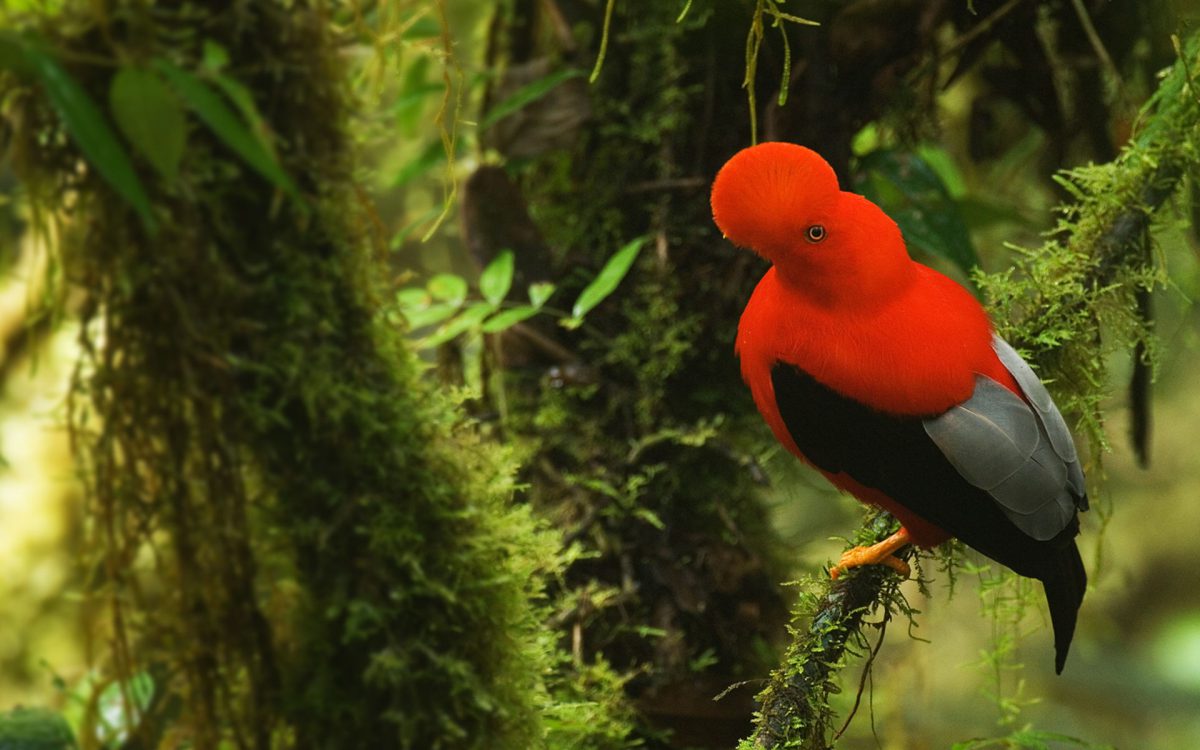 The forest has hiding places, treasures troves among the green thickets, special niches between steep ravines and rocks over the rivers. These are the meeting place of a species of cotinga unique to the Andes, where garish flashes of intense red leap about amid the eternal green. This is the courting place of the cock of the rock (Rupicola peruviana).

The cotingas are a large family – Cotingidae – made up of an enormous diversity of shapes, colours and especially sizes. It is believed that of all the birds of the Passeriforme order, the cotingas are the family that is best represented in body sizes, with species present at all levels. This family is exclusive to Central and South America with more than 60 species, all of which attract a lot of interest due to their stunning colours and shapes, but also because they present a challenge of exploration and camouflage to be able to find and observe them. Those seeking the cock of the rock are no stranger to these noble trials. 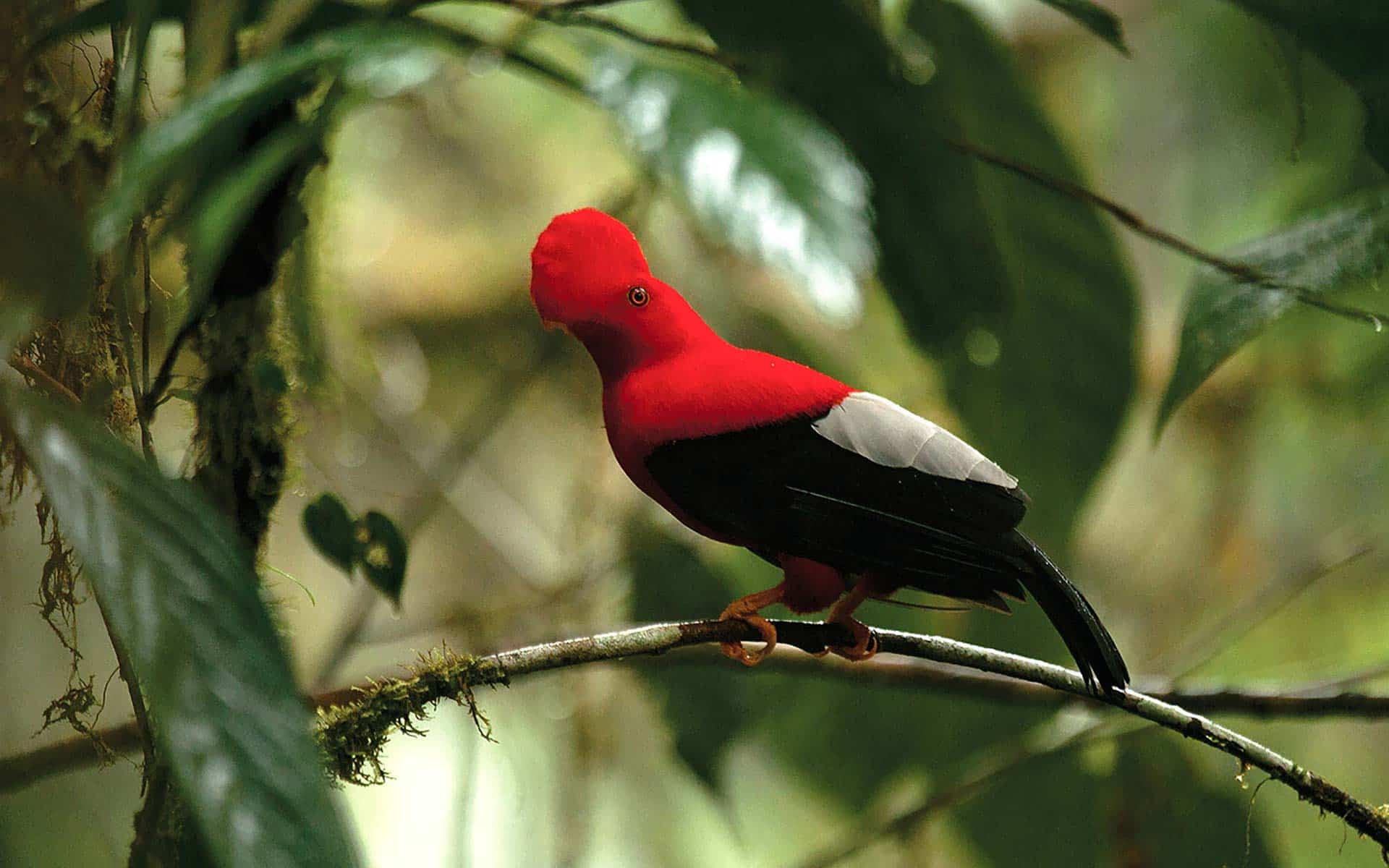 This species, distributed from Venezuela to Bolivia along the flanks of the Andes, between 500 and 2,400 metres above sea level, is characterised by having a marked sexual dimorphism and for frequenting, in a highly emotional manner, leks to find a mate. This means that there are great physical differences among males and females, the males being magnificently adorned with crests and intense splashes of red: fire among a deep green. The females, however, are a muted brown and have a small crest. Leks are places where the males meet up in groups, in very attractive places, to flaunt themselves. Just like a catwalk, the females can then observe them and choose the flashiest, as much in colour and movement as in song, to be their partner.

It is still not known well what is the benefit of searching for a partner like this, though there are many theories. On strutting their stuff so obviously, they run the risk of attracting the attention of predators and dying in the attempt to attract a female, but the fact is that to be able to observe them in the leks, under a camouflaged hideout so as not to frighten them off, is a true gift of nature.

These large cotingas, with a body length of more than 30cm, feed on fruit and insects, though there are rare reports that they have been observed eating little mice. They nest in sheer rocks, usually over rivers, hiding as much as possible between holes, rocks and caves, their nests of mud and saliva. Only the females incubate the eggs and care for the young; the males put all their energy into their beautiful plumage and into their complex dances and courting songs to persuade the greatest quantity of females. Once they have partnered with a female that has fallen for their charms, they return to the lek to attract another. Although they are so obvious in the leks, outside of them they are extremely timid and are found hidden within the forest and even in the ground. They are famous and very popular in bird tourism, but in spite of this much of their ecology and behaviour remains unknown. Due to their timidity outside of the leks and lack of territorialism, they are not easy to study.

The Mashpi reserve is also home to this beautiful species. It is not easy to see. To achieve it is the great reward for those who adventure out before dawn has even touched the horizon, walking in the dark through muddy banks and great ravines for hours and maintaining a patient silence until the red splashes gleam in the green sky of the forest. 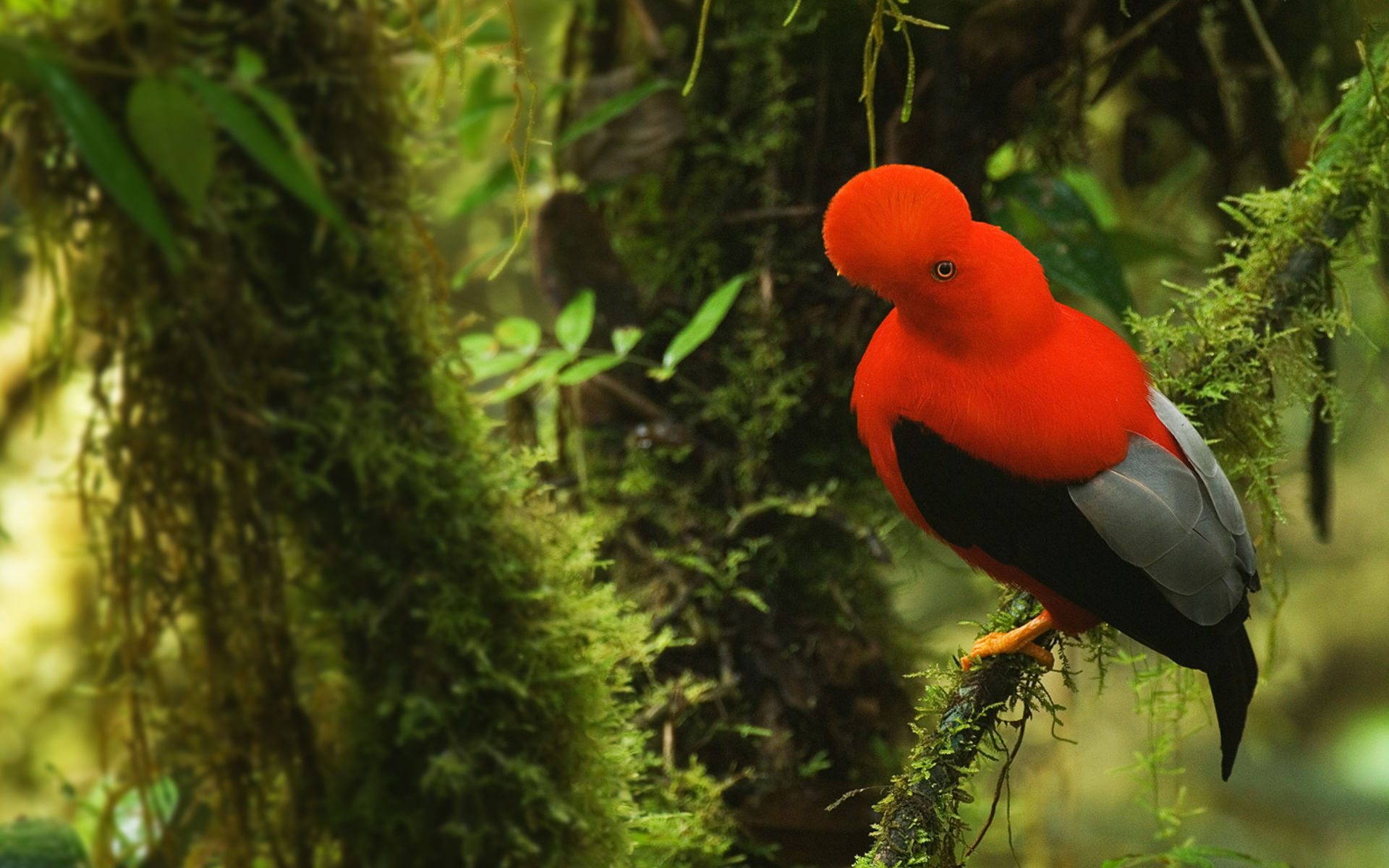