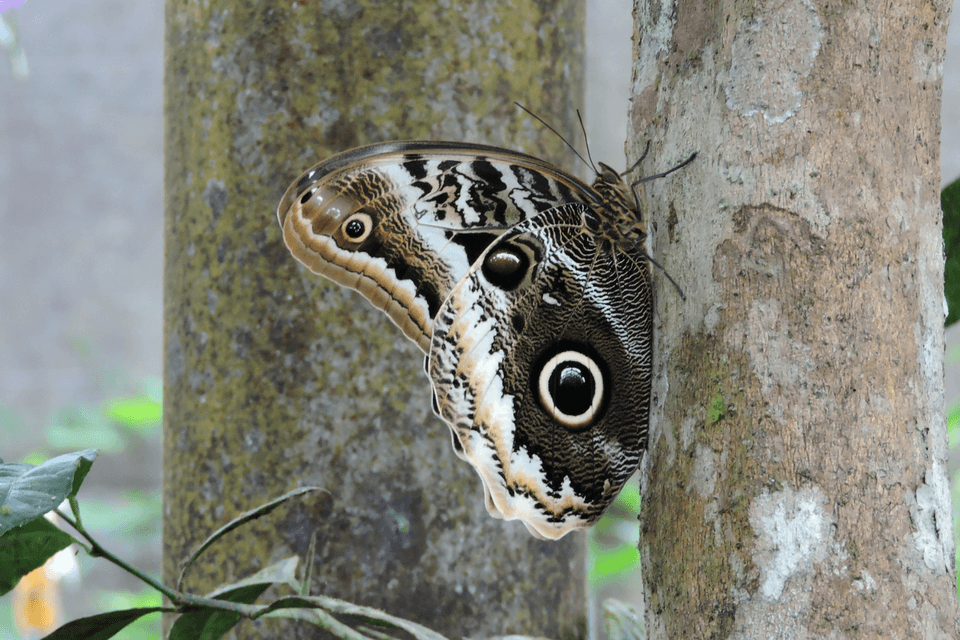 The giant Owl Butterfly (Caligo eurilochus) at Mashpi Lodge happens to be one of the largest butterflies in all of Ecuador and one of 20 classified species of owl butterflies in the world. The owl butterfly belongs to the Nymphalidae family and Caligo genus – a unique classification of butterflies that can only be found on the American continent, mainly in the tropical forests that run from Mexico all the way to those in South America. In Ecuador, they live in forests at the foothills of both sides of the Andes, up to around 1,800 meters above sea level. 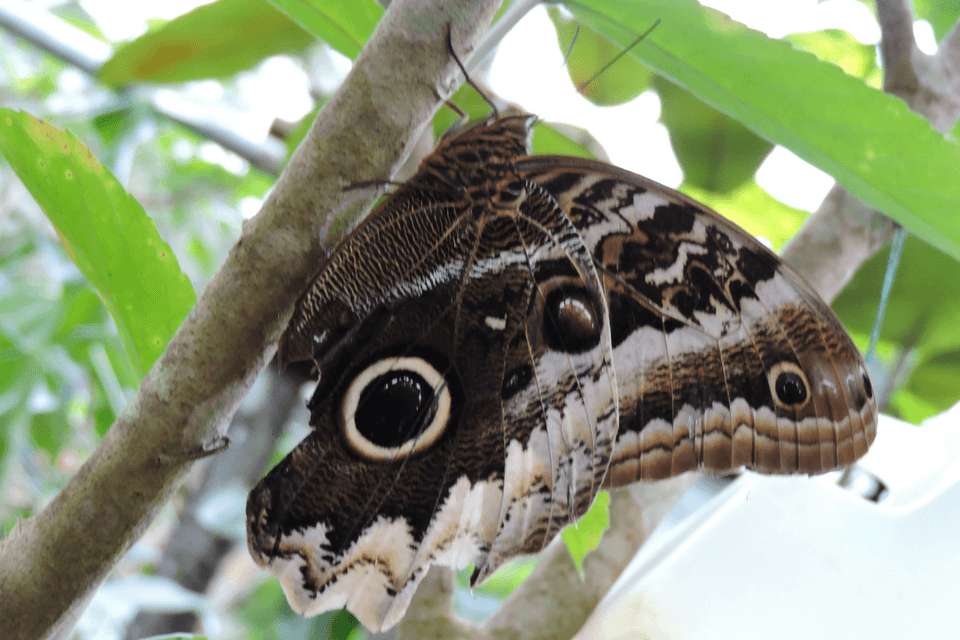 The giant Owl Butterfly, which is also called the Caligo, measures up to 20 cm (7.9 in) in wingspan, making it particularly visible to avian predators. As a result, it has developed a few behavioral and physical adaptations that help raise its chances of survival.

Among its behavioral adaptations, the Caligo has learned to fly small distances at a time so as to give any potential predators a harder time spotting and following them. This butterfly is also most active at dusk, when there are fewer birds out hunting and when visibility is at its lowest.

What makes the giant owl butterfly at Mashpi Lodge particularly interesting is that it employs mimicry, an evolutionary adaptation in which a harmless species copies the colors and patterns of a slightly more dangerous species.

As seen in the pictures of this blog, the Caligo’s wings each have two large circles that mimic the eyes of a much larger animal. This simple adaptation confuses predators and keeps them at bay by tricking them into thinking that the butterfly is a larger, more dangerous animal.

There are a number of theories that try to explain the reason behind this mesmerizing bit of mimicry. As its common name suggests, the Caligo’s wings may be imitating the eyes of an owl so that other species (birds in particular) think twice before attacking. Another theory is that the Caligo’s wings (the corners, specifically) have patterns that resemble a snake, which helps protect it from a number of other predators.

Another well-known example of mimicry in nature is that of the fake coral snake, which mimics the colors of the real coral snake (one of the most venomous snakes in the animal kingdom). Both these mimicking and real coral snake species can be found within the Mashpi Reserve. Fortunately, the poisonous type (the real coral snake) has an incredibly small head, which is designed to prey on smaller animals. As a result of its tiny head, it’s rather difficult for the snake to successfully bite a human.

Our guests at Mashpi can actually get ridiculously close to the Caligo over at Mashpi’s Life Center.

Doubling as a research station, the Life Center is one of Mashpi’s most successful scientific experiments. It is officially managed by four of our staff members.

For research purposes, our science team regularly collects butterflies that are found throughout the reserve. These butterflies are kept inside the Life Center’s open areas, which allow them to fly about freely and reproduce, even. The fruits of this latter process allows us to easily collect their eggs and study them. In the process of doing so, the butterfly’s life cycle is mapped out: from egg to caterpillar, from to pupa to butterfly. To date, around 300 species of moths and butterflies have been identified at the Reserve, and the team at the Life Center has managed to successfully reproduce around 50 of these. All the information collected is added to a growing database that helps us protect the plants and animals of the Mashpi Reserve.

While the Life Center serves as a laboratory for our scientists, it also serves as an important tool that helps educate our guests about butterflies, their reproductive cycle, and the ways in which we can each help protect these incredible creatures. Here, guests can watch closely as caterpillars gradually transform into butterflies, all of it in real time.

previousFascinating encounters in the forest