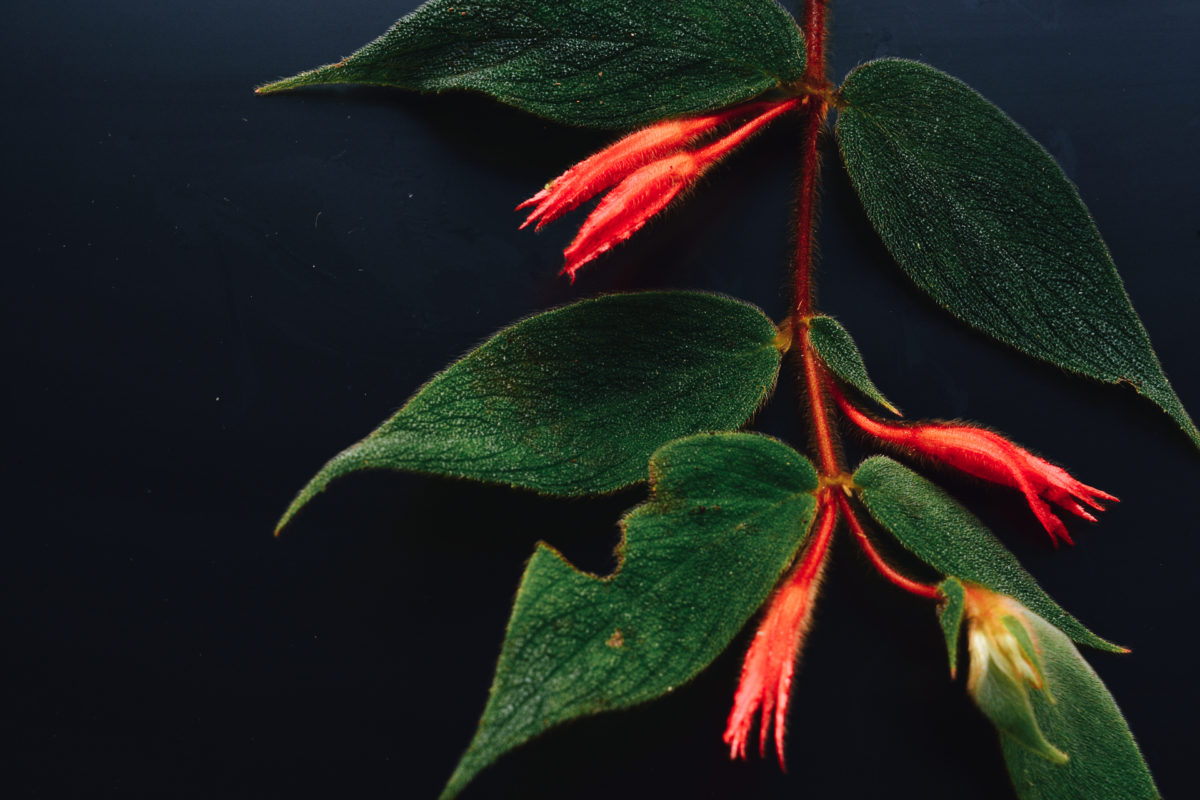 A new plant species previously unknown to science has been identified. Columnea fluidifolia is the newest member of Gesneriaceae, a family of flowering plants consisting of about 152 genera and some 3,540 species.

The discovery is a product of a joint effort between Mashpi’s Research & Biology Team and botanists from Ecuadorian and international academic institutions, with grant funding provided by the Swiss Federal Research Institute (WSL), the National Geographic Society, and the Swiss National Science Foundation. 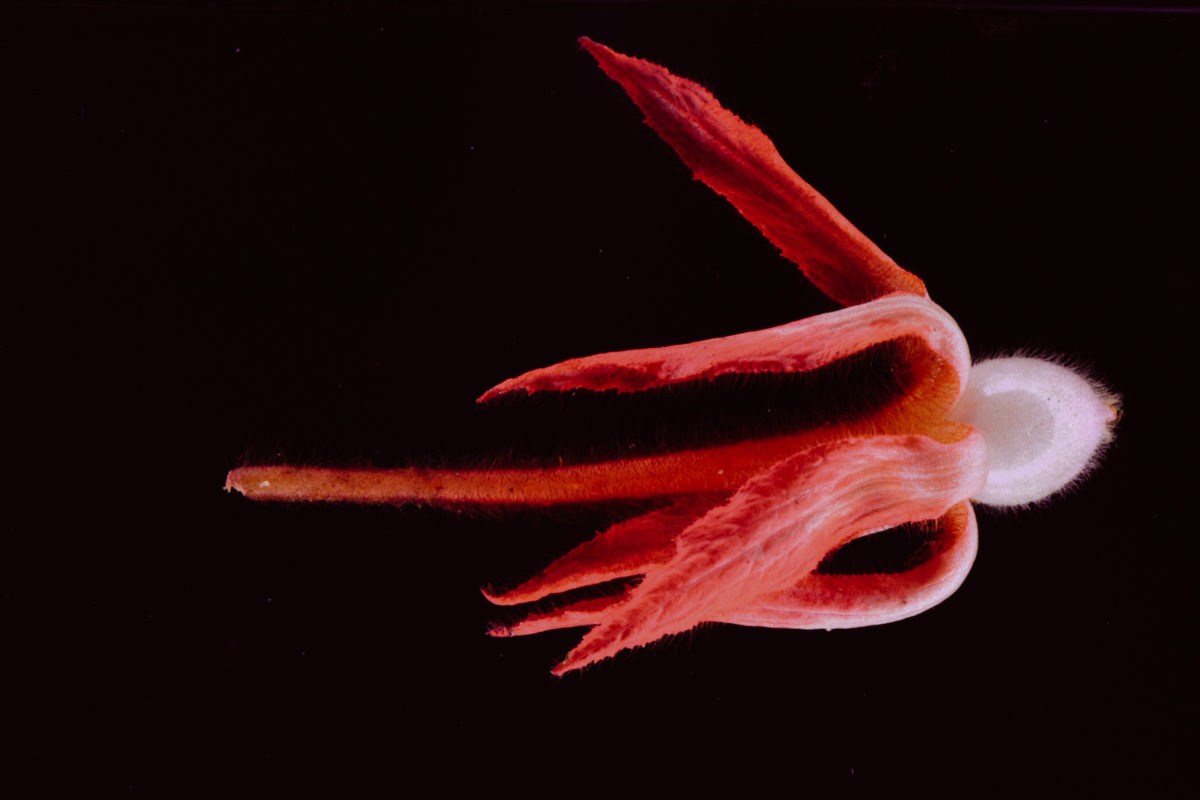 The discovery of this new species derived from a different, but equally fascinating, field study: The Ecology of Plant-Hummingbird Interactions, conducted in Mashpi between 2017 and 2019 by WSL (Switzerland) and Aves & Conservación (Ecuador). Flowers and hummingbirds are intimately related in the natural world, which is why studies about interactions including preferred plants and hummingbird-feeding behavior are important. The delicate balance between the lively hummingbirds and their colorful counterparts is becoming harder to study due to habitat loss.

It is not uncommon for studies to lead to newer projects. In Biology, subjects tend to interact with each other and researchers are always on the lookout for unexpected indicators of scientific interest. 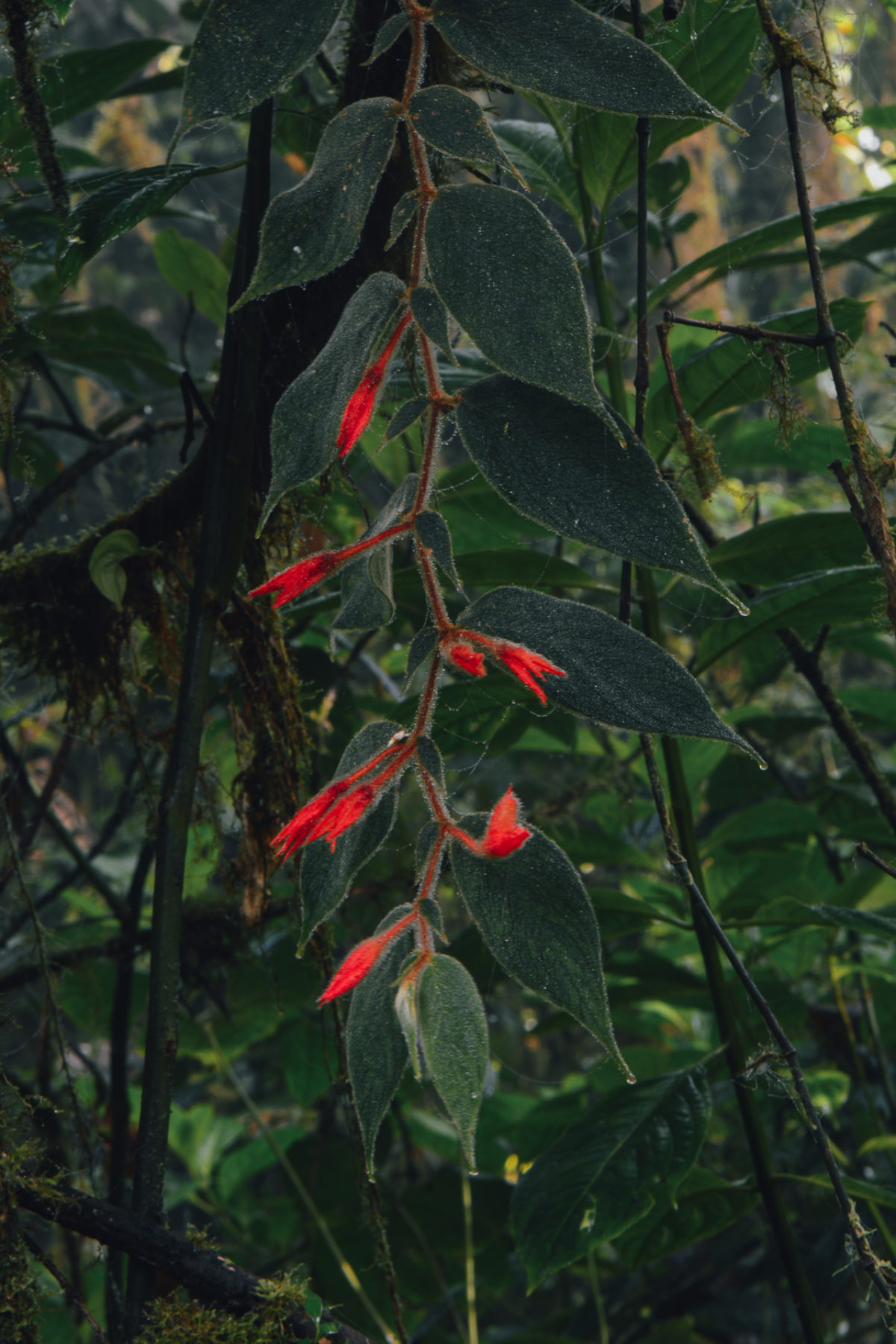 Who discovered the new plants?

Individuals of the Columnea sp. plant caught the eye of expert botanist Francisco Tobar, who decided to initiate a whole new field study.

Plants were photographed in the field and subsequently pressed and dried.  Morphological observations and measurements were made from live collections, alcohol-preserved material, and digital images. Then, after a painstaking process of comparison with other collections of various other recognized species native to Colombia, Panama and Costa Rica housed in digital libraries and herbaria, the specimens were recognized as members of a distinct species.

The 10th New Species Discovered Within the Mashpi Reserve

Scientific research is a fundamental pillar of the project that encompasses Mashpi Lodge and Reserve. As such, a permanent resident biologist conducts scientific research since 2009 and manages projects that have meticulously catalogued the multitude of species that make Mashpi their home.

Columnea fluidifolia is the 10th new species discovered in the Mashpi Reserve, a cause for celebration among the scientific teams that work there. It represents the newest entry in the region’s huge inventory of biologically diverse flora, which includes around 500 catalogued species.

Check out these related articles: New species of Magnolia

The endemic status of these plants reiterates the importance of conservation in the Andean Chocó. An endemic species is the evolutionary result of many special adaptations to this bioregion, making its discovery an incomparable development for tropical biodiversity and something that is unique to the region.

Something special about this species is the unusual arrangement of its leaves; the same sprout holds both pairs of anisophyllous leaves (different sizes) and pairs of isophyllous leaves (same sizes). It’s an epiphyteplant (i.e., it grows atop other plants), with pendular, colorful and eye-catching patterns. 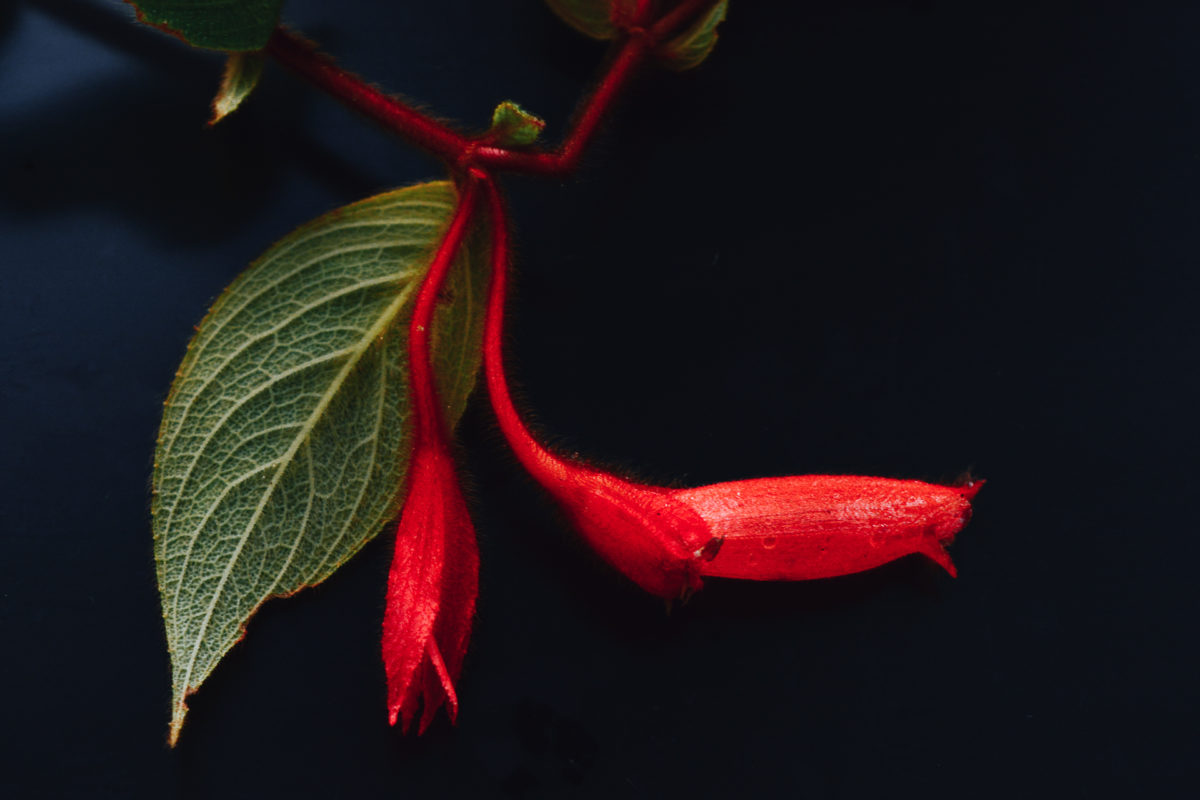 Is Columnea fluidifolia part of a healthy population?

Only about 40 individuals of the species have been identified, which automatically puts it on the critically endangered list. Plants such as these rely on reserves like Mashpi to guarantee their continued survival. Their small numbers make their discovery all the more thrilling, but sadly, also serve as a reminder of the precious nature of species such as these. 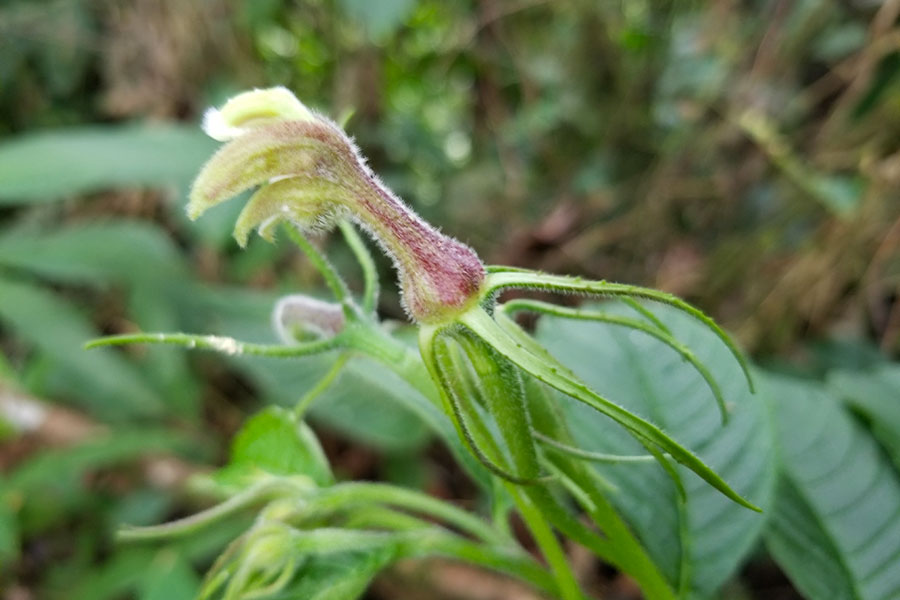 Mashpi Reserve, in the heart of the Andean Choco, is incredibly unique, not just for its remarkable biodiversity, but for the continuous discovery of new species, be they flora or fauna. Take, for instance, two of the most recent plant discoveries: Burmeistera catulum and Burmeistera velutina, which are both part of the Campanulaceae family of bellflowers.

While these two species are closely related to one another, they are distinct in appearance. The Burmeistera catulum features a more pronounced number of trichomes (like short, fine hairs) that encompass the stem and flower, which is essentially colorless. The leaves of this species range from translucent to purple and seem rather long, taking on an oblanceolate shape.

One lively creature present throughout Mashpi Reserve, and the region, is the bat. And, thanks to these nocturnal busy bodies, the Burmeistera have a willing and eager partner to facilitate pollination. What attracts bats to these plant species appears to be the combination of odor with the texture of the trichomes.

Bats, as you know, use echolocation. They rely on their enhanced olfactory (smell) and auditory (hearing) senses to home in on these fascinating plants. And, since the Burmeistera don’t seem to waste any energy on producing a colorful flower to attract an otherwise sight-based pollinator, their odor is the primary attractor for bats.

How were these new species discovered?

These two new discoveries are a result of field research conducted by Nathan Muchhala of the University of Missouri–St. Louis in July of 2018. This endeavor was made possible through Mashpi’s ongoing collaboration with the Universidad Indoamérica, which facilitates research and studies of the Choco based in the Mashpi Reserve.

The area of the reserve where these two species were discovered has been host to several research projects that have led to a total of seven new plant and animal species discoveries. Most recently in 2019, a new type of orchid was logged in this area—the Lepanthes mashpica. Also in 2018, two new types of aquatic insects were discovered along the rivers and streams that flow through this thick and wonderous cloud and rainforest. Prior to that, 2015 saw the discovery of the endemic Hyloscirtus mashpi frog, and 2016 saw the discovery of the beautiful Magnolia mashpi tree.

Are you ready to live the adventure of a lifetime? 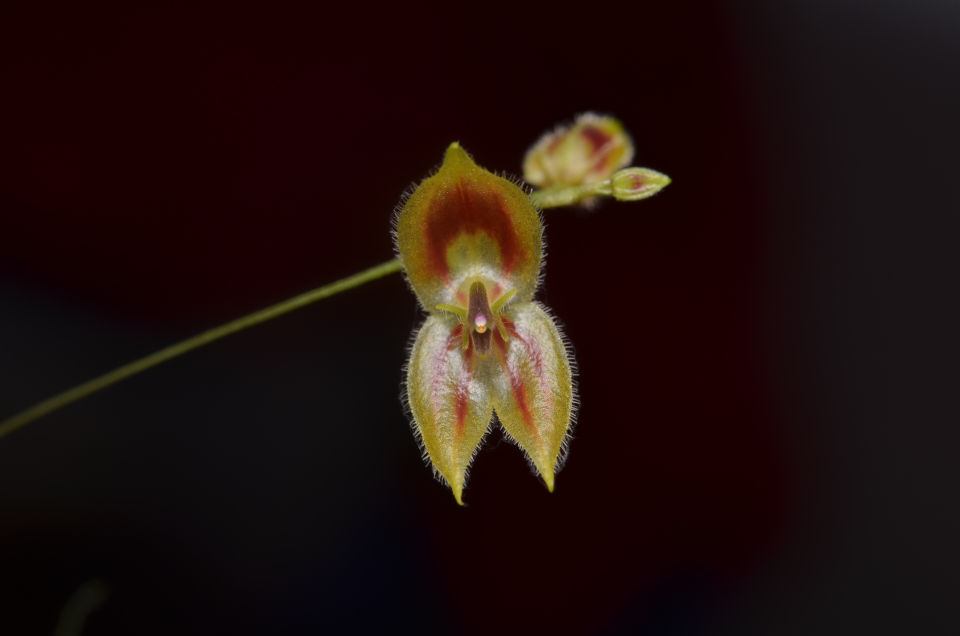 A new species of orchid has been found in the Mashpi Reserve, an essential part of the Choco biosphere, located in north-western Ecuador. The discovery occurred thanks to a joint effort between Mashpi Lodge’s Department of Research and Biology, Quito’s Botanical Garden, and Universidad de las Americas (UDLA), a local university.

Lepanthes mashpica (Baquero & T.S. Jaram), named after its home, is a species of orchid that belongs to the Pleurothallidinae subtribe of the orchid family. The Lepanthes genus, one of the most diverse in the world, comprises over 1100 species worldwide. 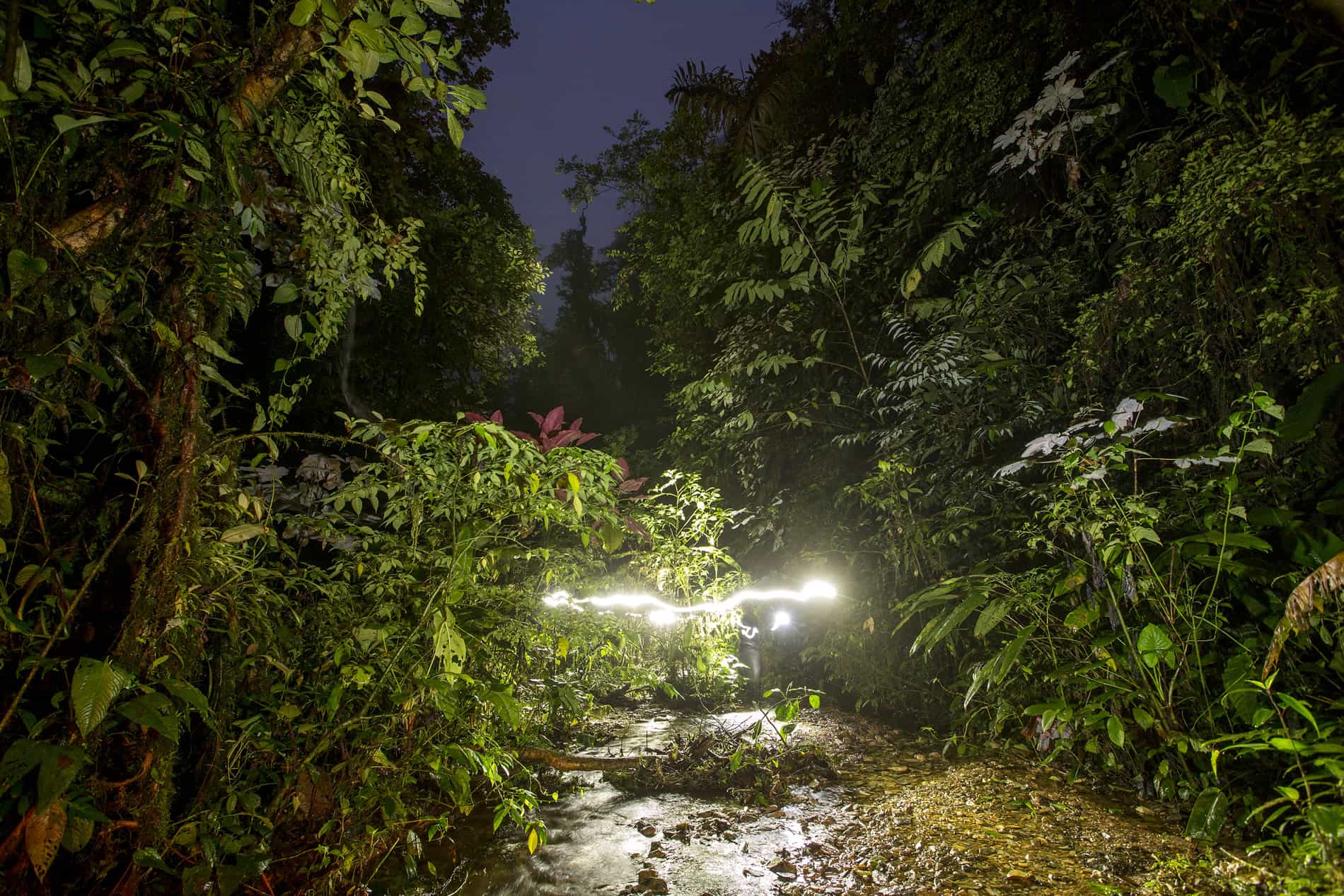 How do new species of orchids get discovered?

The type specimen was collected in 2017, during an excursion through one of the many trails that surround Mashpi Lodge. Lead researcher Luis Baquero (UDLA-JBQ) looked for crucial clues in the shape and form of the plant, expertly using methods of taxonomy to establish the distinct traits that set this species apart from the rest of its subtribe. The cataloging process confirmed that it’s a distinct orchid species, previously unrecognized by science.

The process is a bit longer than one might expect. According to Mateo Roldan, the Research Director at Mashpi Lodge, it took several outings. “Finally, on Luis’ third visit, we were able to find this orchid in bloom. This was when he said to me, ´This is a new species! ´ the excitement was immense! Later, back at the lodge, he showed me the details of the flower: shape, color, pattern, but especially the number of hairs over the petals. I couldn’t wait to start sending pictures to my friends and colleagues with the good news!” 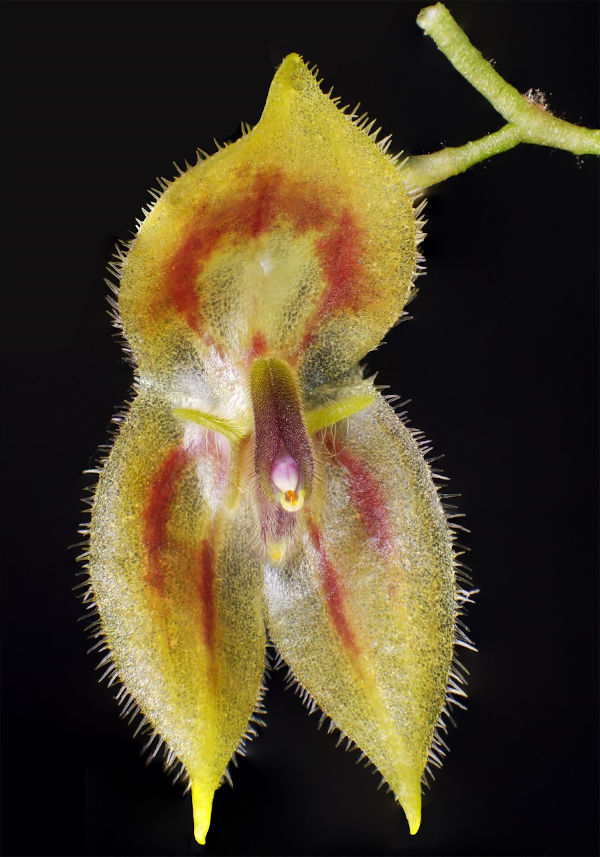 What lies in store for this newly discovered orchid?

Luis and his team claim that there are several healthy populations of this species located at the Mashpi Reserve and that seedlings and adult specimens can be found alongside each other, which bodes well for the long term health of the species. For the time being, it is considered endemic to the Reserve, seeing as no specimens have been found elsewhere.

These efforts highlight the amazing level of biodiversity that occurs in the rich environment of the Choco forest, which has the distinction of being one of the most diverse in the world while also being one of the most threatened. Conservation programs rely on research such as the one that identified this orchid to quantify the value of the region, which is home to all sorts of unique wildlife. 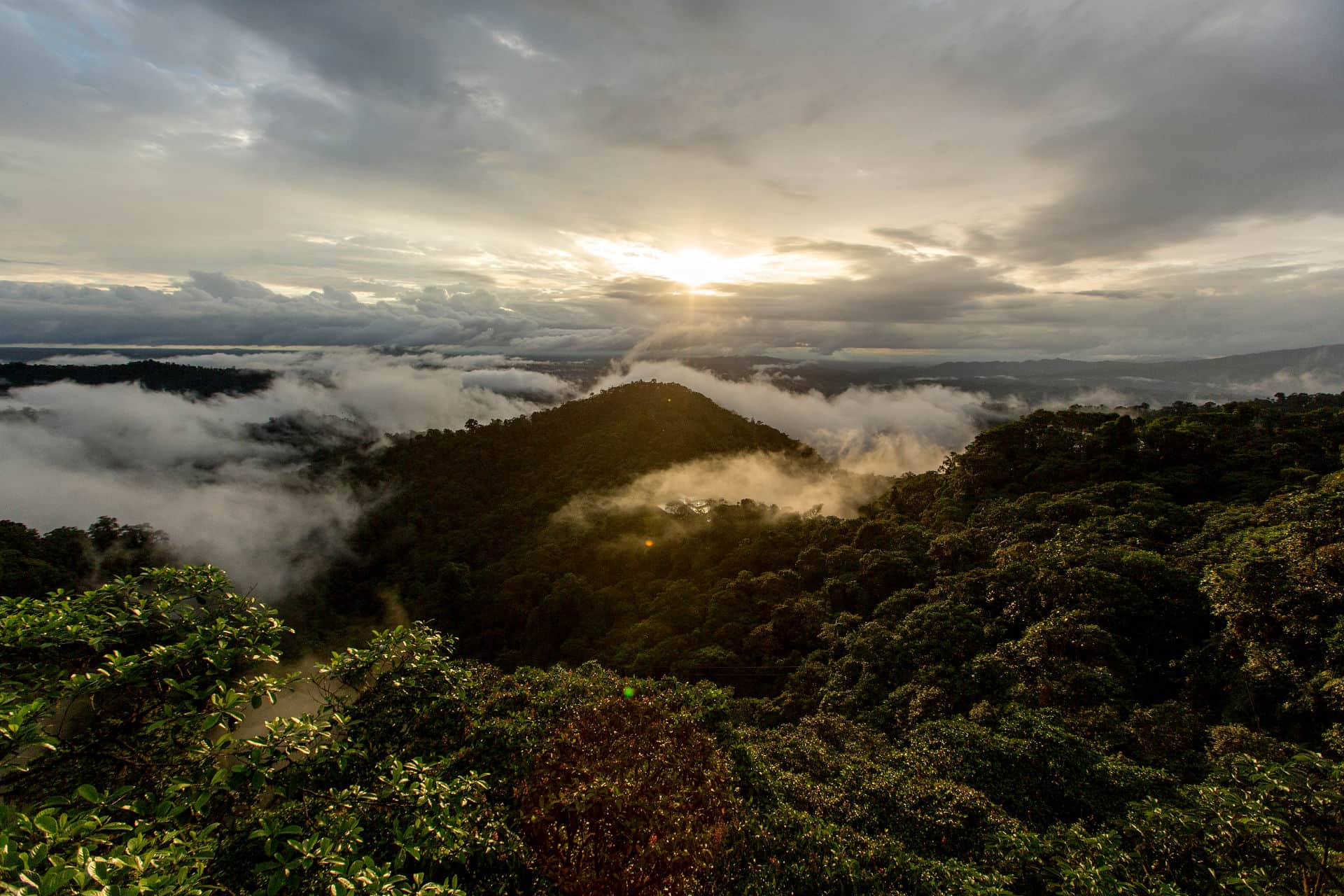 The Mashpi Reserve is part of a concerted effort to protect a substantial part of the Ecuadorian Choco rainforest from deforestation. Efforts include a carbon-sequestering program, education programs for local inhabitants around the region,  and scientific efforts such as the one that led to the discovery of Lepanthes mashpica.

These efforts are supported in part by contributions from Mashpi Lodge.

If you wish to learn more about the conservation and scientific research sponsored by Mashpi Lodge or would love to plan a trip there, visit the webpage. 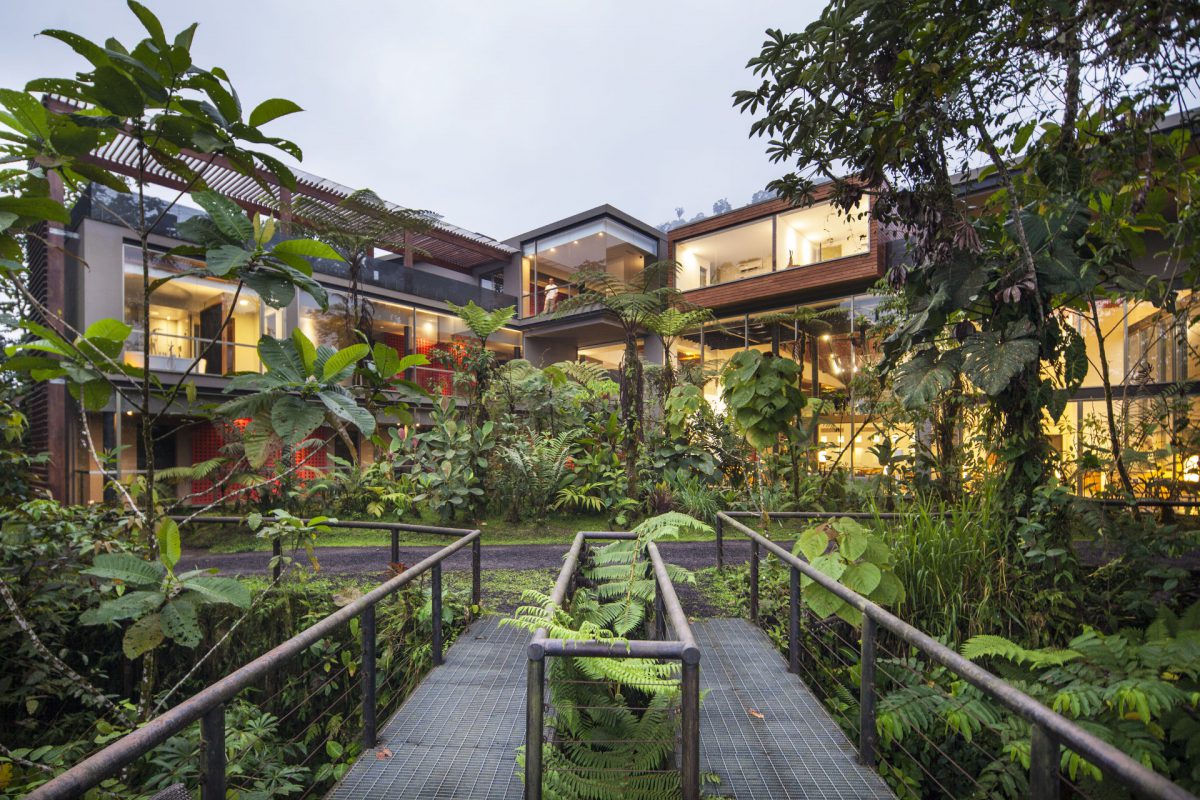 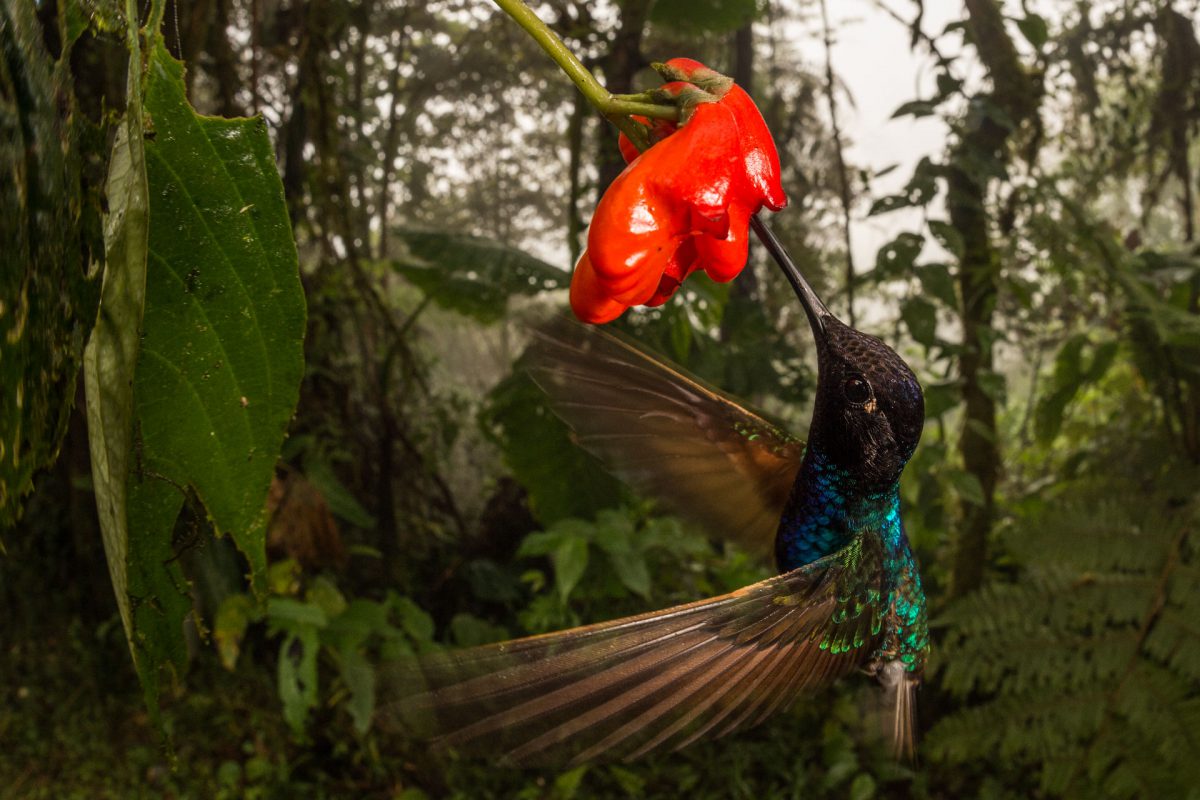 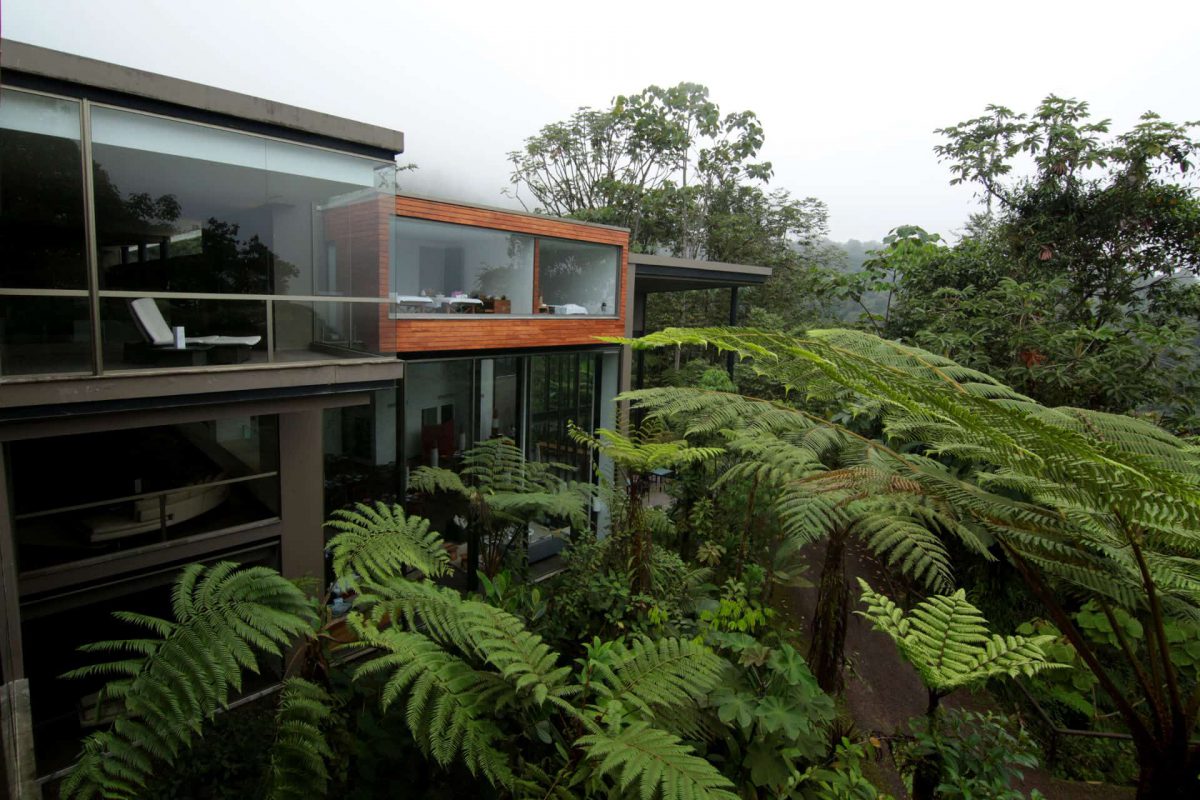 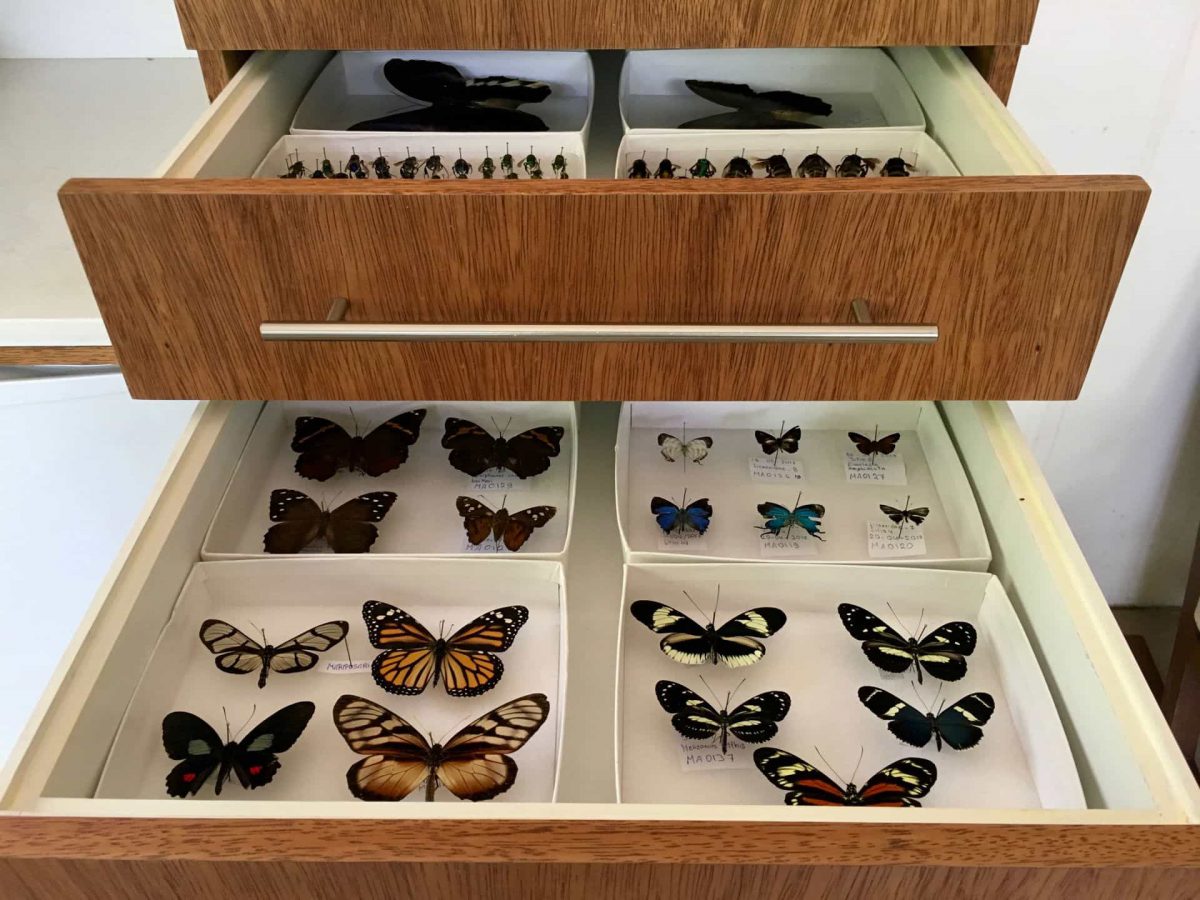 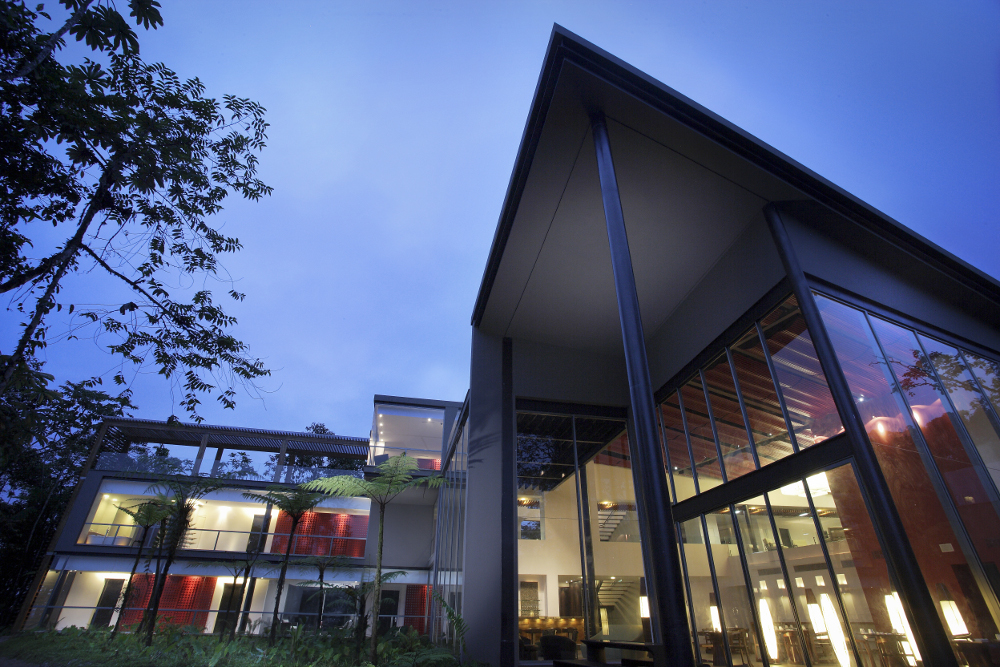